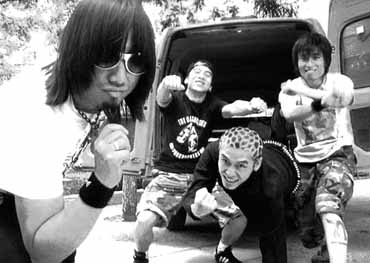 Beijing punks Brain Failure (脑浊) have confirmed their upcoming performance at Speakeasy Bar on Sunday November 12. The band, one of China's more international rock acts, toured the US earlier this year with bands including Dropkick Murphys and Against All Authority and is now touring central and western China.

After signing to Japanese independent label Bad News Records, Brain Failure has performed at major US festivals including the Warped Tour, South by Southwest and College Music Journal's music festival in New York City. The band has been together since the late 1990s and sings in Chinese and English.

You can listen to a few Brain Failure MP3s here - sounds like they've listened to plenty of Clash and Operation Ivy. No word yet on time or ticket prices for the show, but we're guessing it'll be an early show. We'll let you know when we find out, should be one of the better shows to pass through town this year. Thanks again to Xiao Lu for the heads-up.

Update: Just spoke with Xinxin at the Speak, the show starts at 10:00 and tickets are 25 yuan.