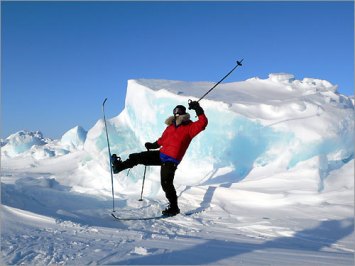 When thinking of famous explorers, most people think of Western names such as Hillary, Heyerdahl and Cousteau before they think of Chinese explorers. This is not surprising, given that the last notable Chinese explorer, Zheng He, was sailing around the underbelly of the Eurasian continent just before Columbus sailed the ocean blue.

Zheng He is a national hero for many Chinese, especially here in his native Yunnan. There is a park in Jinning named after him and the new Kunming airport will reportedly be named Kunming Zheng He International Airport.

Today another Yunnan native – Jin Feibao (金飞豹) – is attempting to resurrect Chinese exploration of the world, which was stifled during centuries of dynastic government, wars and the political climate of the Cold War.

In 2007, Jin trekked to both the North and South Poles and summited the highest peaks on all seven continents. Last year he became the first Chinese to trek across Greenland.

On April 6, he will leave Beijing for Africa, where he will attempt to cross the Sahara desert from west to east – a first for Chinese explorers.

"I've been to the world's highest points and also to the coldest places in the world, now I want to enjoy the hottest place on the planet," Jin told GoKunming.

Together with geoscientist Fei Xuan and Xinhua photographer Wang Yongji, Jin will cross the Sahara via foot, camel, car and river canoe. After setting off on his journey in Ghana, the 88-day expedition will also pass through Burkina Faso, Mali, Niger, Algeria, Libya and Egypt, finishing at the Red Sea after a trek of more than 7,800 kilometers.

"I'm an explorer, so I'm always looking for new challenges," Jin said, "But environmental protection and awareness are also important to my expeditions – the entire world, including China, is coming under increasing pressure due to desertification – one of our goals is to learn more so that we can understand how to deal with this problem."

In terms of motivation, the thrill of exploration and environmental concerns are followed closely by a desire to go where no Chinese explorer has gone before, he added.

"The world is full of extreme places where Chinese have never set foot," Jin said. "I want to go to these places and show that it can be done."