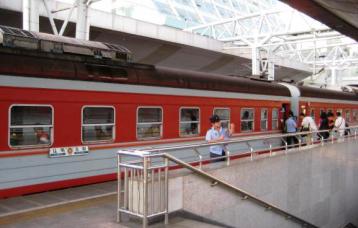 Kunming's South Railway Station has long been the city's most important passenger train station, but its days appear to be numbered with the announcement of plans to build a new south station – in Chenggong.

In addition to becoming the new passenger rail station for Kunming, the new south station in Chenggong (呈贡) will also be connected to the urban railway network that is already under construction. In addition it will serve as the main hub for long-distance bus services in and out of the city.

Times are changing for both Kunming and Chenggong, with most municipal offices and major universities in Kunming moving to new facilities in Chenggong by the end of this year. Chenggong is also being built up into a logistics hub aimed at facilitating rail transport between China and Southeast Asian countries.

As with Kunming's new airport – also currently under construction – the new south rail station in Chenggong may also include involvement with foreign companies. According to officials in the Kunming municipal government, companies from France and the US as well as domestic Chinese companies have been involved in bidding for the project.

The planned rail link between the mainland and Taiwan will be centered in coastal Fujian province and will reportedly include a line connecting Beijing and Taipei. According to officials cited in Chinese media reports, the cross-strait rail network may be expanded to include Hefei, capital of Anhui province in eastern China, as well as Kunming.

Concrete details on how Taiwan would be linked to mainland China via rail have not been released, but it is thought by some that a combination of underwater tunnels and island hopping across the Taiwan Strait is possible.