The arrest and subsequent death of a 24-year-old man in a county near Kunming has called the police explanation for the death – playing hide-and-seek – into question.

On January 30, Li Qiaoming (李荞明), a resident of Beicheng town in Yuxi, was arrested in Jinning County (晋宁县) for illegal logging and taken to a local detention facility. On February 8, Li reportedly suffered injuries while in detention and was taken to a hospital where he was diagnosed with severe brain damage – Li died in the hospital on February 12.

According to a February 13 report in Yunnan Information News, police in Jinning – which is located on the southern edge of Dianchi Lake – told Li's parents that their son had suffered his fatal injuries during a game of "elude the cat" (躲猫猫), the Chinese name for the children's game hide-and-seek.

The report stated that while playing hide-and-seek, Li was kicked and beaten by other detainees and due to his carelessness crashed into a wall, leading to his brain damage.

Li's relatives told the newspaper that they felt the official explanation for Li's death was "extremely farfetched" – an opinion that has been echoing throughout newspaper opinion pages and BBS sites across China.

Playing 'elude the cat' has become the first internet meme, or 'thunder word' (雷语) of 2009, becoming synonymous for danger and unclear circumstances.

'Eluding the cat' is the second internet meme to come out of southwest China in the last eight months: in July of 2008 thousands of residents of Weng'an, Guizhou province, rioted after police said a young girl drowned herself in the company of a young man who was "doing pushups" (做卧俯撑). 'Doing pushups' subsequently became a popular phrase among sarcastic – and typically young – Chinese netizens. 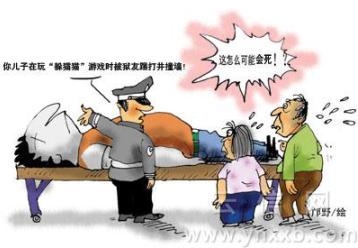 Jinning police have yet to release any further clarification of the events leading to Li Qiaoming's death.

Watch out for your life and stay away friom the 'elude the cat'!