With Kunming being groomed to be China's gateway to Southeast Asia, more attention is being paid to the new R3E road which runs 1,807 kilometers and links the city with Bangkok. Initial reports from Bangkok suggest that although international trade along the route – which also passes through Laos – has increased sharply, it could grow even faster if physical and bureaucratic obstacles are addressed sooner rather than later.

The R3E road opened in Autumn 2008 to boost intraregional trade, tourism and investment. Yunnan is home to the road's northernmost 688 kilometers, which lead into a 229-kilometer stretch leading into Laos. The remaining 890 kilometers link the Lao-Thai border with the Thai capital. 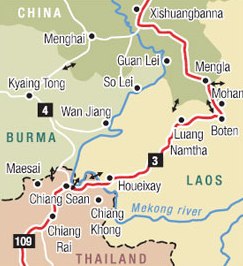 In terms of the flow of goods between the more developed economies of China and Thailand, Laos is a bottleneck for the road in terms of physical infrastructure and customs processing, according to a report in the Bangkok Post.

A 480-meter bridge across the Mekong River connecting Houeixay, Laos with Thailand's Chiang Rai province was originally expected to commence construction this year. However, the possibility of delay has increased as the global financial crisis has worsened. Construction of the 310 million yuan bridge is to be jointly funded by China and Thailand.

In addition to structural challenges to making the road more efficient, the Bangkok Post reports that customs officials in Laos "continue to collect high tariffs, sometimes arbitrarily, that can amount to as much as 30% of the total cost of goods," citing Thai businesses.

Should transport on the road become more streamlined, experts are predicting that as many as 10 million containers could travel R3E annually.

The road's proponents are also saying it helps alleviate gridlock on the Mekong River. During the river's high water season, ships traveling from Jinghong to Chiang Rai take around 12 hours, while ships heading upstream can take two to three days, which is much less viable for agricultural and horticultural goods that have a short transport life.

Does anyone know of bus services plying this route?

Laos is a bottleneck due to one party state, and poverty. But, Laos will change that image in the next five to ten years.

Yes, there are plenty of bus services along this route, although a number of separate "hops" must be made, for example, while it is possible to get to Chiang Khong (Thai-Lao border) on just one bus, you must first cross to Huay Xai to catch either 1) a Luang Nam Tha or Boten bound bus and then change for a China bound bus in LNT or across the Chinese border or 2) a Jinghong bound bus that actually crosses the border. Once in China, a Kunming bound bus can easily be found. This route is currently the most viable and quickest route between Bangkok and Kunming. The bus from Vientiane, Laos to Kunming takes too long and is too slow, and most Thai students in Kunming who opt for the overland journey rather than going by plane always go via Chiang Khong and never via Vientiane. Once the fast train to Laos (and by extension Bangkok) is running, then that will become the fastest overland route.