Independent publisher, bookstore owner, bilingual author and arguably the best Scrabble player south of the Yangtze, Alex Liu is never far from the printed word. His love of books, combined with a gift for foreign languages, is making China more accessible to the rest of the world. 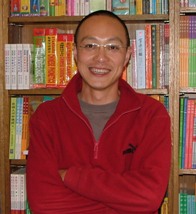 A native of Suzhou, Liu moved from Shanghai to Dali in 1996 after spending five years as an engineer at a German multinational, during which time he became fluent in German and English.

In 1997, Liu co-founded the Yunnan Café on a lower, less-frequented stretch of the old town's "Foreigner Street". One of the more popular cafes among the long-term residents of Dali from around China and the rest world, at the time the Yunnan Café was one of the only places in China where you could find books by Gabriel Garcia Marquez, Bill Bryson, Salman Rushdie and other modern authors. The café also offered a variety of academic books about southwest China, Tibet and Southeast Asia. Sales were good.

In 2001, Liu opened his first bookstore on Fuxing Lu, Mandarin Books. Aside from English-language books, the store also offered novels and reference books in Chinese and a wealth of materials for foreigners studying Mandarin. Within three years, he had opened two more stores: one in Lijiang on Sifang Jie, the other here in Kunming at 9-10, 52 Wenhua Xiang.

No longer content just selling books, Liu decided to make them. In 2003 he founded Caravan Press, a publishing venture focused on the lesser-known China. Shortly afterward, Caravan published its first book, The Tower of Five Glories, a study of the ethnic Bai people living in Dali written by CP Fitzgerald, who lived in Dali in the 1930s.

For Liu, Caravan's raison d'être was obvious: 'There are lots of books on Chinese culture, but their content is mostly superficial - not much academic value, not deep enough. A lot of people are doing research about China and Yunnan but not much information is available.'

Liu said that the people buying Caravan books typically have a background in China or Chinese culture and are looking for very specific materials. "Sometimes travelers have a genuine interest in Chinese culture too, generally not the backpackers. Many travelers don't care about Chinese culture. For them it doesn't matter where they go: China, Thailand, Vietnam - it's all "Asia" to them.' Liu said that 30 percent of Caravan's sales were through the Internet, the rest through his bookstores.

Around a year after publishing The Tower of Five Glories, Caravan published its second book, Joseph Rock and His Shangri-La, an interesting look at the travels of the eccentric Austrian Joseph Rock - a traveler, cartographer and photographer who in the 1920s and 1930s gave the West its first good look at Lijiang and other parts of Yunnan, primarily through his writing for National Geographic in the US. The book was written by Jim Goodman, a longtime traveler and researcher of southwest China and Southeast Asia.

Liu himself has also authored a book (in English) about Chinese chess, published by Foreign Language Publishing House in 2005. At present, he's more focused on publishing than writing, with upcoming titles including books about Mah Jong, Southwest China's ethnic minorities and Kunming on the way.

Being a publisher of niche English-language books about China is 'very difficult' Liu said. The biggest obstacle is finding good writers in Yunnan, he said.

'There are good journalists in Shanghai and Beijing, but they don't know much about this part of this country or understand the cultures here,' Liu said.

Hopeful authors, take note: Liu and Caravan are looking for English manuscripts 'focused on anything connected to China - weird things people don't know about: geography, ethnology, history, botany, whatever. We're looking for anything deep and detailed. A book about Yunnan spices, for example, no one else would be interested in that - I would.'

Could you send me an email address for Jim Goodman?