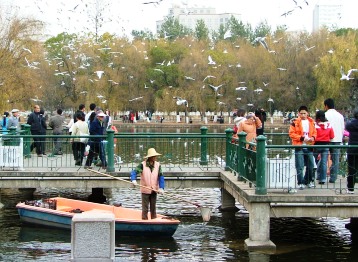 Kunming to go 3G in June
According to a Kunming Daily report, Kunming is one of 28 second- and third-tier cities in China in which 3G mobile phone licenses will be issued in June of this year. 3G licenses were reportedly to have been issued in first-tier markets including Guangdong and Shanghai yesterday.

Another billion dollars to be spent cleaning Dianchi
Yunnan Governor Qin Guangrong (秦光荣) convened a meeting with the Dianchi Lake Water Pollution and Treatment Work Group in which he emphasized that the six major engineering projects aimed at improving the lake's water quality must be fully implemented according to the schedule approved last year.

Spending this year on cleaning up the lake – China's sixth-largest freshwater lake – will total approximately 9.2 billion yuan (US$1.3 billion), adding to the billions of dollars that have already been spent in futility on addressing the lake's environmental degradation over the last two decades.

According to reports, three security guards were injured by the mob and one journalist's camera was destroyed.