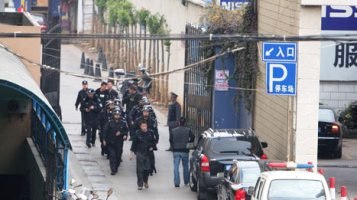 A normal day of shopping at the Longquan Lu Carrefour turned violent Saturday when three women were attacked and a nurse taken hostage by a man wielding a knife. The man was killed by police after a five-hour standoff.

According to Kunming media reports citing police sources Lu Zhiwen (陆志文), 39, had been having problems with his girlfriend. He began attacking customers in the Carrefour outlet with a knife, seriously injuring three women, all of whom later underwent surgery and are described as recovering, with two still in critical condition.

At one point, Lu took one of the injured women hostage, after which a nurse went into Carrefour to treat the hostage. Lu released the hostage, taking the nurse hostage and telling police that he was going to kill her if his girlfriend did not come to the store to see him.

According to the Kunming Public Security Bureau, Lu's strength was fading in the fifth hour of the standoff, and he accepted the police's suggestion that they bring him some hot food. Policemen quickly procured a bowl of soup noodles from a nearby restaurant and placed it in front of one of the Carrefour entrances.

The day's drama ended when Lu opened the door and a police sniper fired one shot, which entered Lu's left temple, killing him instantly. The nurse who had been taken hostage escaped unharmed.

Hopefully the injuried would be fine!

I know that he injured 3 women but for me the real culprits is the policeman who shot him for this crime... 中国人都缺乏文明....

Just because the government does something does not mean it is wrong (or right for that matter).

They saved an innocent girl's life. Any society would have done it.