Shaolin Temple to take over management at four Kunming temples 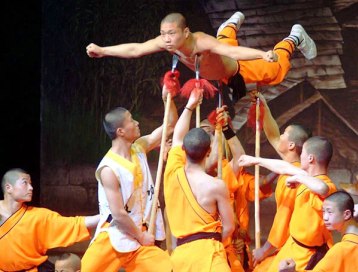 Shaolin Temple (少林寺), the famed temple in Henan province where kung fu is said to have been invented, is going into the temple management business, starting in Kunming.

According to Kunming media reports, this new 'Yunnan Shaolin' is expected to serve as a platform through which the temple will transmit 'Shaolin Culture' to South and Southeast Asia. Ten monks from Shaolin Temple will be dispatched to the four Kunming temples, where they will manage business with the goal of attracting tourists.

The reported terms of the 20-year agreement between Shaolin Temple and the Guandu district are for Shaolin to take over management of the four Kunming temples in exchange for all the profits generated by the temples via ticket sales, sales of religious paraphernalia, religious texts and any donations made by visitors.

Eric Mu at Danwei explains that Shaolin's Shi is facing growing criticism for his business-oriented approach to running the temple.

Shi Yongxin said that the influence of the Shaolin brand will give a significant boost to the popularity of these temples. He denied that the takeover was part of expansion plans at his own temple, as well as the charge that he is running the temple like a chain store.

Earlier this year, Shaolin was criticized for opening an online store selling a variety of Shaolin-related products, including a book priced at 9,999 yuan that purportedly contained the temple's kung fu and medicinal secrets.

or you can see me on