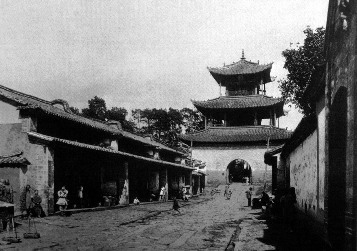 The above photo is of Jukui Lou, which at three stories high was one of the tallest man-built structures in Kunming at the beginning of the 20th Century. The building, which straddled the street today known as Tuodong Lu, was one of Kunming's better-known landmarks until its destruction in the 1950s.

In 1901, French General Consul Auguste François took the first photo of Jukui Lou, which featured one small tunnel that allowed traffic to pass through it. Years later as Kunming's traffic pressures grew, two more tunnels were added to the building's bottom floor. Eventually, as more motorized vehicles took to Kunming's streets, Jukui Lou and its tunnels were becoming a hindrance. In the 1950s, officials decided to destroy the building rather than try to preserve the landmark, which only two decades earlier had been featured on local currency. 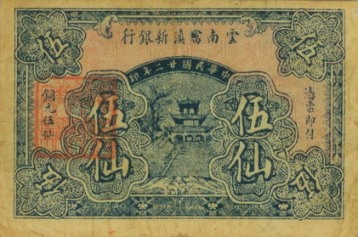 While photographing Jukui Lou, François took the opportunity to climb to the top of the building for a shot of Kunming from above. The photo below captures what was then the southern part of Kunming. 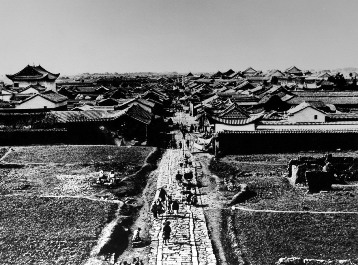 Today the Jukui Lou is generally known by its nickname, Zhuangyuan Lou (状元楼), named after the famous Yunnan economist Yuan Jiagu (袁嘉谷). The Jukui Lou became known by Kunmingers as Zhuangyuan Lou after a placard with characters written by Yuan was hung upon the building. The characters (大魁天下), which could be loosely translated as "it's a player's world", summed up his high profile in Kunming and Yunnan at that time.

Yuan, who was born in Shiping, was the first Yunnan native to attain zhuangyuan or "top scholar" status, and is still a source of intense local pride. His former Kunming residence on Cuihu Bei Lu became a source of public debate this summer when it was converted into a high-end restaurant, after which the Kunming municipal government announced that officially recognized protected historical buildings could no longer be converted into restaurants, hotels, etc. Unfortunately, there are very few old buildings left to benefit from the new rule. The photo below is of the Jukui Lou/Zhuangyuan Lou's former location as it looks today. 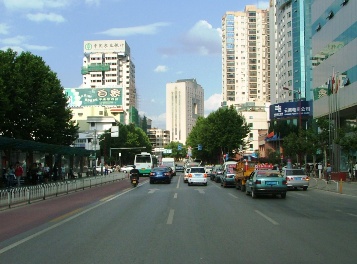 If old buildings could be put to modern use, they'd be more likely to be preserved. But as you say, most old buildings are already gone.