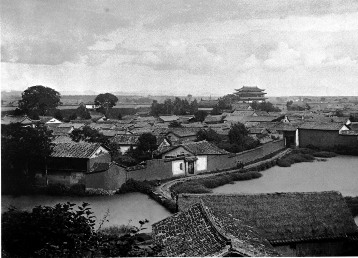 During his time in Kunming, French consul Auguste François focused on documenting the people and famous landmarks of Kunming and elsewhere in Yunnan. With what was then cutting edge-technology, François captured hundreds of vignettes of life and sights in Kunming at the beginning of the last century, but he took relatively few bird's eye shots of the city.

The above photo was taken in 1900 from the top of Wuhua Shan (五华山), or the 'mountain of the five glories'. Far from a mountain, this hill had one of the best views of Kunming when it was still a low-lying city with almost no architecture exceeding two stories in height.

In the foreground is the Lüshui ('Green Water') River (绿水河), which has been long drained. Behind the homes in the middle of the photo is the eastern portion of Kunming's city wall, with the main east gate aka Dadongmen (大东门) towering over the rest of the city on either side of the wall.

Kunming's city wall was demolished in 1952, three years after the founding of the People's Republic of China. The eastern portion of the wall was converted into a road, named Qingnian Lu, or 'Youth Road', after the teams of local youth who demolished the wall.

wondering where is Wuhua Shan...
Google can't find it : tinyurl.com/3qesjb