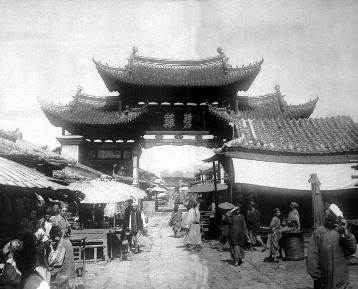 This 108 year-old photo is taken facing westward toward Jinma Biji Fang, which is a popular place for tourists to take their photos with the two large paifang (牌坊, gateways), one named 'Golden Horse' (金马, jinma) the other 'Emerald Chicken' (碧鸡, biji) that are said to represent mountains to the east and west of the city, as well as sun and moon deities.

This above photograph of the Biji gateway shows the original Biji structure, nearly half a century before it was destroyed, along with the Jinma gateway, in World War II. New gateways built to the same dimensions as the originals were built in the 1960s.

Aside from the original structures being destroyed, another major difference between now and then is that homes and shops were built right up to the gateways, whereas today the area around the gateways is a large commercial plaza (see image below) with a labyrinth of discos and clubs. 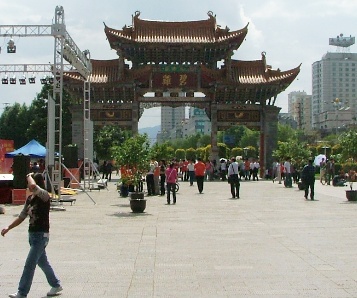 Kunming versus the cold snap