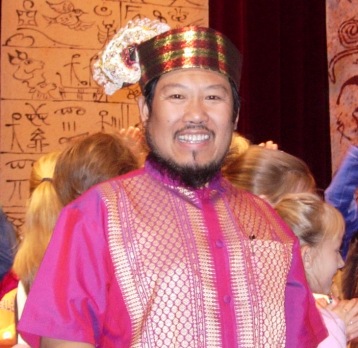 Editor's note: This post was written by Kunming-based translator and cultural consultant Jeff Crosby, who has taken delegations of Yunnan folk musicians to the United States. Crosby writes the blog South of the Clouds.

Gen Dequan (哏德全), the famous Dai folk musician, passed away Tuesday night of an apparent brain hemorrhage. He was a master of the hulu (葫芦丝), a reed instrument fashioned out of drinking gourds which is popular among the Dai and many other ethnic groups throughout Yunnan and Southeast Asia. He was fifty years old.

Known as "King of the Gourd", Gen Dequan was instrumental in popularizing the folk music of the Dai people, and making their music a household name throughout China, synonymous with the cultural diversity of Yunnan Province. Throughout his career he toured many cities and countries, sharing the musical traditions of his people.

I was fortunate to know him. We first met on the Yunnan Revealed tour in 2005, when I was tour manager and he was a performer. He came again with us to the Smithsonian Folklife Festival in 2007. He was a good man and a phenomenal musician.