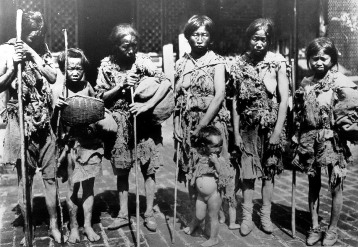 In general, life in southwest China is much less arduous than it was a century ago, but natural disasters can still strike with little notice - as this year has demonstrated to catastrophic effect. This year southwest China has experienced a massive winter storm, a catastrophic earthquake near Wenchuan in Sichuan, and the more recent tremor that destroyed or damaged hundreds of thousands of homes in Sichuan and Yunnan.

More than a hundred years ago, Auguste François bore witness to the tragedy of the flooding of Luzhou in Sichuan. The people in the photo above are refugees from the flooding of the Jinsha River, which eventually becomes the Yangtze River.

That these refugees even made it to Yunnan is little short of a miracle. These seven extremely poor people had barely enough clothing to cover themselves, and included two elderly and one child in their ranks.

Moreover, some of the refugees are missing toes, likely due to leprosy (麻风病), and the child's belly is bloated from undernourishment. The sad scene is an unforgettable illustration of the Chinese phrase yi bu bi ti (衣不蔽体) or "not enough clothing to cover oneself".