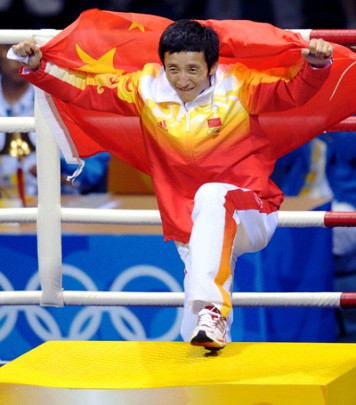 Editor's note: GoKunming has been crossposting content from our sister site China Sports Today throughout the Olympics.

On the final day of competition, China took two gold medals and a silver in women's rhythmic gymnastics to end up with a total of 51 gold medals and 100 medals overall – its best Olympic medal haul to date. Number two United States and number three Russian Federation trailed China with 36 and 23 golds, respectively.

In terms of total medals, the US took the most medals, with 110, followed by China with 100. The Russian Federation took the third-largest number of medals with 72.

Zou Shiming wins China's first boxing gold
Zou Shiming ( 邹市明) made Chinese sports history on the last day of the Beijing Olympics by claiming the country's first gold medal in boxing. Zou was declared winner in the second round when light-flyweight opponent Serdamba Purevdorj of Mongolia pulled out of the match due to an injury sustained in a previous match.

China's Zou Shiming won China's first boxing gold today by defeating Mongolia's Serdamba Purevdorj in the final of the light-flyweight class. Zou hit Purevdorj with a combo of punches in the first round, earning one point.

"I wanted to give the spectators a wonderful show, but I did not expect that my opponent would get injured," Zou said. "However, the gold medal is the most important thing."

"I'm really excited," said Zhang, "before the Olympic Games, I was just a normal athlete but now I am a gold medalist. I was perfect today and did very well psychologically and physically. Throughout the Games, I fought with 100 per cent of my skills. I put myself in a low position and tried my best to fight against my opponent."