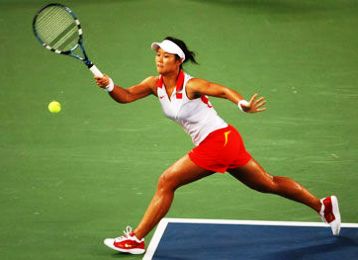 Li came back from a 4-1 deficit to force and win a tie break in the first set. She carried that momentum into the next set, going up 3-1. Venus fought back to take three sets in a row and a 4-3 lead, but couldn't hold on to her lead. The win puts Li into the semifinals, where she will face the winner of a match between Jelena Jankovic (Serbia) and Dinara Safina (Russia).

With her win at the 2006 Australian Open, Li became the first woman from China to win a WTA singles event. Since then, she has three third-place finishes in Grand Slam events.

Li is the last woman standing among China's four entries in the tournament. Zheng Jie (郑洁), hot off a run to the Wimbledon semifinals, lost in the third round of the singles tournament to Russia's Safina (6-4, 6-3), the sixth ranked player in the world.

Alize Cornet of France dispatched Peng Shuai (彭帅) in the second round, and Yan Zi (晏紫) was the first of the Chinese women to be knocked out, losing in the first round to Vera Zvonareva (Russia).

Zheng gets a chance to avenge her loss when she and Yan, face Safina and Svetlana Kuznetsova in the doubles quarterfinal on Friday, August 15. The Chinese pair got there by beating a Swiss duo, 6-3; 7-6(2).

On the men's side, China has been much less competitive. Xu Xinyuan, Sun Peng and Zeng Shaoxuan all lost in short matches—55 minutes for Xu, 1 hour 6 minutes for Zeng and 1 hour and 7 minutes for Sun. Zeng and Xu also played doubles, losing in the first round.