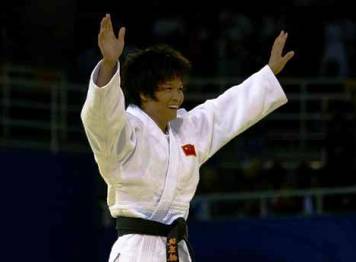 As of 9:30 pm Beijing time, China is leading the gold medal tally, with six medals. They have also won two silvers. South Korea has three golds, and two silvers. The US has two golds, two silvers and four bronzes, meaning that the US and China are tied for first place on overall medal count, with eight each.

Here's a count of China's gold medals so far:

And here are some of the Sunday highlights for China's athletes prior to the much-anticipated meeting between the Chinese and US men's basketball teams.

Young lifter gives China second weightlifting gold
Long Qingquan, the 17-year-old Chinese weightlifter, acheived two junior world records on his way to winning the gold in the men's weightlifting 56kg category. The event is scored by totalling the weight lifted in the snatch and the weight lifted in the clean & jerk. Long's world records were for the snatch (132 kg) and for total weight (192 kg).

Historic men's swimming medal
Beijing native Zhang Lin won an historic silver medal in the men's 400 meter freestyle today with a time of 3:42.44, only 0.58 seconds behind gold medalist South Korean Park Taehwan. Zhang's silver is the best finish ever by a Chinese male swimmer in the Olympics.

China takes gold in women's judo
Guangdong native Xian Dongmei 冼东妹 picked up China's third gold medal of the Beijing games – this time in women's judo - defeating An Kum-Ae of the DPRK (aka North Korea) in the 52-kilogram category. Soraya Haddad of Algeria and Nakamura Misato of Japan won bronze. It is the second gold medal for Xian, who topped her weight class in Athens four years ago.

China unable to dethrone South Korea's women archers, takes silver
In women's team archery Zhang Juanjuan 张娟娟, Chen Ling and Guo Dan won silver. The team was beaten by perennial powerhouse South Korea. France took bronze. This is not Zhang's first taste of Olympic hardware, she won the silver in Athens and also won a silver at the 2006 Asian Games in Doha. Zhang was the only person on this year's team that was on the Athens team.

Unfortunately for Zhang and company, South Korea has been absolutely dominant in women's team archery for decades, winning the event seven Olympics in a row.

who is john galt?