After years of unprecedented buildup and international scrutiny, the curtain is about to formally go up on the 2008 Beijing Olympics tonight at 8:08, but some football (soccer) matches have already been played in the last two days, including China's first two performances.

On Wednesday the Chinese women's team beat Sweden 2:1 and on Thursday night the Chinese men's team broke even 1:1 in their match against New Zealand... so far, so good for an Olympic host country that will view anything short of the top of the medal count as a failure.

In addition to his book and post at Kalamazoo College, Xu is a frequent source and occasional contributor to the Washington Post regarding sports in China - he recently penned an analysis of the path of football in China and why in football terms China is, as he puts it: "the sick man of the world".

China Sports Today spoke with Xu about what this Olympics means to China and how Chinese athletes may perform in this year's games. With the opening of the Olympics only hours away, this is what Xu had to say about this year's games:

China Sports Today: What have been the driving forces behind China's increasing interest - and success - in international athletic competition?

Xu Guoqi:To demonstrate that China can compete against the best not only economically but also physically. To show that China is a rising power which deserves world respect. To win in sports competition has been a national policy and organized sports have been under direct control of the state.

CST: Many noted during the last Olympics that Chinese athletes were showing more emotion than ever before, how emotional do you think these games will be for Chinese athletes?

Xu: More emotional than ever, since they are competing in their own Olympic Games and on their home turf. 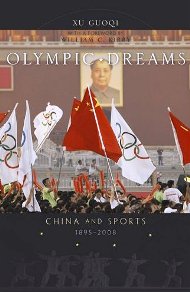 CST: The hopes of hundreds of millions of Chinese are riding on its athletes this Olympics unlike ever before - do you think this is more likely to inspire Chinese athletes or cause them to buckle under the pressure?

Xu: It will serve as double-edged sword and help the athletes to perform better but sometimes also contribute to an unnecessary pressure on athletes which can hurt them.

A good example of the late case is the 1985 soccer match between the Hong Kong team [still a British colony at the time] and China's national team. The supposedly much stronger China team was defeated because of the enormous pressure to win.

CST: As a Chinese person living in the United States, what similarities and/or differences do you see between the ways Chinese and Americans view sports?

Xu: Chinese have injected too many political ingredients into sports, as it links the results to national honor and pride. Sports in China have also carried too much of a historical burden and have been especially linked to China's past humiliation.

In the USA, it seems that they nowadays people are less likely to link sports with political burdens or history. They tend to enjoy the sports more and take the results of victory or loss less emotionally.

CST: In your book you discuss the political dynamic of the relationship between China and the Olympics. If the Beijing games go on without any major problems, what benefits - if any - do you think China will reap in terms of its international image and standing?

Xu: It will help the Chinese to get rid of the long-lasting syndrome of can-do spirit mixed with strong sense of inferiority and start to be confident of themselves and of the nation. It will project an image of China which is open, dynamic, and internationalized and it will enhance the international prestige and status of both the nation and the regime.

CST: What event or events will you be watching closest in this year's Olympics?

This is the usual drivel spouted by yet another China expert. Athletics have nothing to do with a country earning the respect of other nations.

"It will project an image of China which is open, dynamic, and internationalized and it will enhance the international prestige and status of both the nation and the regime."

An open China doesn't make rules about what can be shown, written about or visited. An internationalized China and civilized China doesn't displace millions of workers to put on a show of propaganda that is or no importance for anyone other than the prima donna athletes who "compete." Chinese international status is that of a developing country with a massive, poor agricultural populace ruled with an iron fist by ignorant thugs.