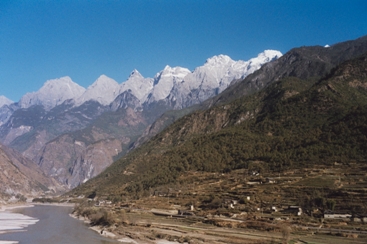 A story in today's Sydney Morning Herald reports that United Nations cultural organization UNESCO has threatened to remove a 1.7 million hectare heritage site in northwest Yunnan from its World Heritage List if government development schemes for the region go ahead as planned.

Located in Lijiang, Diqing and Nujiang prefectures, the Three Parallel Rivers Protected Areas contain the north-south flowing Jinsha, Lancang and Nu Rivers, which are headwaters of the Yangtze, Mekong and Salween Rivers, respectively. The rivers pass through steep gorges reaching 3,000 meters in depth and are bordered by glaciated mountains reaching as high as 6,000 meters. The site is made up of eight protected geographic clusters and is considered one of the most biologically diverse temperate areas in the world.

Government plans to reduce the size of the protected site by 20 percent plus the addition of new dams and mines to the area are at the crux of UNESCO's threat to de-list the site. UNESCO advisors from the World Conservation Union are reported to have issued a report warning to China during a visit in April of this year.

On one hand, government officials would like to turn the site and northwest Yunnan in general into a popular ecotourism destination - which if managed well could potentially improve life for locals with tourism cash. On the other hand, the same officials seem intent on exploiting hydropower and mineral resources in the area. The choice seems clear: maintain the beauty of one of the last pristine areas in China, or send it down the path of development at any cost that the majority of the country has traveled. Guess which one sounds better to us?

ecotourism by chinese government, i m impatient ! Like what they make in Dali ;-P