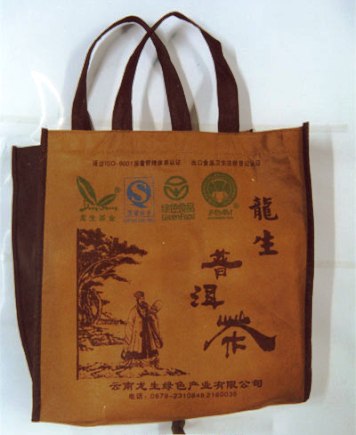 Still searching for a major breakthrough in Monday's bus bombings on Renmin Xi Lu which left two dead and 14 injured, Kunming police have tripled the reward for clues leading to the arrest of the individual or individuals behind the attacks.

According to Kunming media reports, the biggest lead in the case that's been made public so far is that an individual suspected of involvement in the blasts was seen on the first bus to explode at 7:05 am on Monday carrying a bag with the Longsheng Pu'er Tea (龙生普洱茶) logo on it – see image above.

Kunming police have stated that the identity of anyone providing clues related to the bus bombing case will be kept strictly confidential. Anyone with information related to the case can call 110, stop by the police station at 76 Renmin Zhong Lu or call the station at 3387940 or 3623404.

Meanwhile, with Beijing less than three weeks away from the opening of the Olympics, officials are addressing reporter questions about bus security in China's capital.

"We have already taken measures and we will increase security. I hope that all people can support us," Liu Shaowu, Beijing Olympic security director, told reporters, according to a Reuters report.

"We need to step up security measures in all areas for the safety of the bus system," he said.