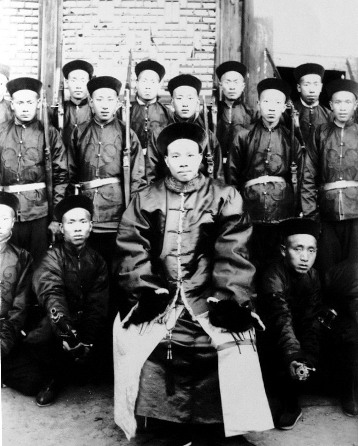 Editor's note: Every week for the remainder of 2008 GoKunming will publish photos from the collection of Auguste François (1857-1935), who served as French consul in south China between 1896 and 1904, during which he spent several years in Kunming. The photos have been provided by Kunming resident and private collector Yin Xiaojun (殷晓俊). GoKunming thanks Yin Xiaojun for providing us a glimpse of Yunnan at the beginning of the 20th Century.

The above photo is of 13 students from the first graduating class of the Wubei Xuetang (武备学堂), Kunming's first military academy, which was founded in 1899. The students, who completed three years of training, are centered around an unidentified teacher from the academy.

By the end of the 19th Century, a little over a decade before the collapse of the Qing Dynasty in 1911, Kunming had become more than just a place to exile disgraced officials, it had become a strategically important outpost at the crossroads of China, Tibet and Southeast Asia. Creating a strong local military force had become a necessity, prompting the establishment of the Wubei Xuetang on the west side of present-day Cuihu Park.

The curriculum at the Wubei Xuetang featured four main subjects: Chinese language, mathematics, cannons and the military drill book (操典). The drill book used at the academy was a book of German military drills. 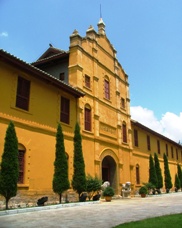 Shortly after the demise of the Qing, a new military academy, the Jiangwutang (讲武堂 – see right image), was built where the Wubei Xuetang had once been located. Today, the Jiangwutang is still standing. A large mustard yellow building from another era, the building is one of the most recognizable architectural works in Kunming.

Within the Jiangwutang is a vast, flat courtyard that was once used for military drills. The building's south wing contains a free museum which narrates the role the academy has played in Kunming and Yunnan's history.

Good stuff. Too many people keep trying to tell me that this building is the old French legation. I've even seen it written in the guide books