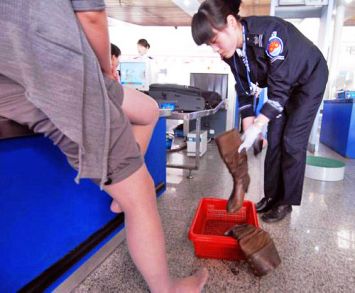 Travelers seeking to take advantage of the recent low air ticket prices for many domestic flights in China may want to consider arriving at the airport a little earlier than normal after July 20.

The Civil Aviation Administration of China (CAAC) announced yesterday that beginning July 20, travelers passing through more than 20 mainland airports will be subjected to an additional layer of security checks before boarding their flights.

In addition to security checks before entering airport waiting halls, there will also be new security checkpoints immediately prior to boarding.

Unsurprisingly, the official reasoning behind the tightening of airport security is Olympics-related. According to a China Daily report:

"The special measure is aimed at raising the security level at the airports and preventing anyone from carrying explosives, inflammables or other materials that can be used to disrupt the Beijing Olympic Games, the CAAC said."

"Suspects will have to go through thorough security checks, and people caught carrying such materials will be dealt with strictly in accordance with the law."

Furthermore, all civilian airports in the restive regions of Tibet and Xinjiang will also add the new security checks.

Although Kunming Wujiaba International Airport is not on the list, it is quite likely that security will tighten noticeably in the runup to and during the Olympics.