Xiao Ximen to reopen to traffic next week 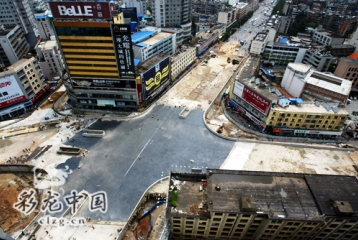 Almost four months after the sudden shutdown of Xiao Ximen – one of Kunming's busiest intersections – the upper level of the new, so-called 'turtle back' flyover is preparing to open to traffic as soon as July 1, according to a Dushi Shibao report.

The report, which cited sources involved in the construction project, said that the upper level of the flyover at the intersection of Dongfeng Xi Lu and Renmin Lu is nearly complete, aside from throwing down 16 centimeters of asphalt and installing four bus stops. Barring excessive rains the upper level should open for traffic on July 1, the report said.

Construction of the flyover has had a major effect upon traffic flow in Kunming's Wuhua district, much of which has been rerouted through ill-prepared streets such as Wenlin Jie, Cuihu Nan Lu and Honghua Qiao. The reopening of Xiao Ximen to traffic is expected to alleviate traffic pressure on these side streets.

According to traffic police statistics, a total of more than 21,000 automobiles, 26,000 bicycles and other non-motorized vehicles and 43,000 pedestrians pass through the intersection at Xiao Ximen during the morning and afternoon rush hours.

Construction of 'Turtle back' throws Kunming traffic into chaos