Interview: Answering the call for on-demand interpreting in China 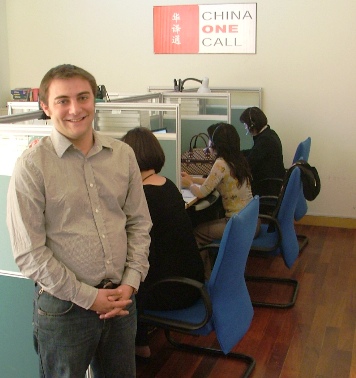 Only a decade ago, the number of foreign visitors to China was but a fraction of the 132 million inbound tourists that visited the country last year – aside from a few intrepid business travelers armed with translators, the majority were students, teachers and backpackers winging it in a country with a notoriously difficult language.

Fast-forward to 2008: leisure and business travel to China is booming, mobile phones services have caught up to developed world standards and the Olympics, which China is expecting to attract half a million foreign tourists, are two months away. One thing that hasn't changed is the significant linguistic obstacle the Chinese language presents visitors, especially Westerners.

The challenges faced by foreign visitors to China have given rise to demand for instant, on-demand interpreting services, rather than hiring a bilingual guide who requires food, lodging and transportation and can become a significant expense on long trips.

Hong Kong-based telephone interpreting service provider ChinaONEcall established its Kunming office in January 2007, entering the rapidly growing on-demand interpreting industry in mainland China. After a free trial period given to a group of beta-testers and then a gradual launch to the tourist and expat market, the company – which has operations in China, the UK and US - had its public launch to media and the international business community in London in October 2007.

GoKunming sat down with ChinaONEcall Cofounder and Operations Director Greg Sinclair to find out more about this growing industry:

GoKunming: Why did you found ChinaONEcall?

Greg Sinclair: I've been coming to China for ten years, first teaching English in Qingdao in 1998, and while I am now reasonably able to hold my own in conversation I can still remember how difficult it is for someone who has just arrived and has no knowledge of Chinese. Despite huge developmental advances over the last decade and increasing numbers of English-speakers, a non-Chinese speaker is still hugely handicapped in trying to get by in China.

My father found it particularly frustrating a couple of years ago when, after visiting me in Kunming, he got completely lost just outside of Shanghai. The only thing he had to help him was a mobile phone and my number. I managed to find out where he was and how he could get to where he needed to be by speaking to a passer-by who'd been handed my dad's phone. The panic was over but then we both thought this could be a really good idea for a business.

GK: Who do your clients tend to be?

GS: Our clients include business travelers, tourists, students and even expatriates - basically anyone who wants a little bit more freedom while moving around in China and doesn't want to rely on tour guides and interpreters or burden their Chinese-speaking friends with frequent calls for help. We also have a large number of customers who aren't in China or even planning a trip to China but want an interpreter for a conference call. We have access numbers in the US and UK so people can call us for either local rate or toll-free and we'll connect the call to the person they wish to speak to - for example a factory manager - and provide the interpreting service.

We are also getting more and more clients wanting document translation by email rather than just interpreting and we also provide this service. In fact, there will shortly be a site dedicated to this at www.chinaONEtranslate.com

GK: What do you see happening to the phone interpreting industry after the Olympics?

GS: I'm not really able to speak for the industry as a whole but I assume, like us, they are very interested in the Olympics and are hoping to get a significant volume of business from that and other events in the future such as the Shanghai Expo 2010 and the Asian Games to be held in Guangzhou also in 2010.

However our business model is not focused on one event or another. We anticipate our business as ongoing and indeed rising to cover what appears to be an exponential increase in business and leisure travel to China. Obviously it would be foolish not to tap into and take advantage of large international events such as the Olympic Games but equally foolish to assume that we can sit on our laurels because China is playing host to such a prestigious affair.

GK: Many companies portray a phone interpreter service as something only used in emergencies, what kind of non-emergency calls do your staff receive?

GS: It's true that there are situations where a service like ours can be a real lifeline in an emergency but thankfully these are not as common as some may believe. Of course we get customers who are in stressful and difficult circumstances and we've helped people out of some fairly sticky situations, which is why our staff are all taught useful conflict management and mediation skills, but we also get many calls which are not emergencies at all.

People use us in all sorts of situations including haggling over souvenirs, changing money in the bank, and just chatting to strangers on a long train journey. We had one Australian who we helped arrange a date with someone he'd been exchanging smiles with over 36 hours on a train, although I've no idea how that eventually turned out. On the business side we had a British customer who was impressed with a jewelry shop in Lijiang. He took the shop's business card, gave it to his friend in the UK who imports jewelry and we set up a conference call. Some of this Yunnan jewelry is now being sold in London. Of course emergencies happen and our staff are ready to help but most of the time it's really about having the freedom to create and take advantage of opportunities that the language barrier can sometimes make impossible.

GK: What are the major opportunities and challenges for the phone interpreting industry in general?

GS: Again, it's difficult to speak for the whole industry but from our point of view we see a rising opportunity in the domestic market. We are already talking to Chinese firms that receive a lot of western visitors, particularly in the export and hospitality industries, and have some exciting partnerships in the pipeline. There is also a growing market of Chinese people visiting English-speaking countries and while this is, at present, mostly in tour groups or with face-to-face interpreters it is starting to change. Chinese people in, for example, the US can call our toll-free number to get an interpreter to help them communicate with English speakers. So the whole setup can work just as well in reverse.

Challenges include helping people who speak English as a second language or people who have quite strong regional accents. Our team is trained in listening to different accents; one of them has even spent a year in Newcastle, England which to my mind has one of the more difficult regional accents for a non-native English speaker to understand. Another perceived challenge is the rise of electronic translators, some of which are dedicated devices and some of which are software based and can be downloaded to a smart-phone or PDA. I say perceived challenge because at the moment these really can't be compared to having a human-being at the end of the phone line and despite huge advances in technology, true artificial intelligence and electronic interpersonal skills are some way off, if indeed possible at all. Another possible challenge is the rise in foreigners learning Chinese and Chinese people learning English but again I think we are a long way off this trend affecting our industry.

GK: Why did you choose Kunming as your base for mainland operations?

GS: That's a question I get asked a lot. Apart from the fact that I was living here already and am recently married to a Kunming girl, it's actually a great place to set up a business. You don't have the huge expenses associated with running a business on the coast and because it's a university town there are actually a large number of highly educated and ambitious graduates.

Of course it's easier and quicker to find staff in Beijing or Shanghai but the first-tier cities have significant staff retention problems. It takes us a little bit longer and a little bit more effort to find the best people here but we know that having trained them they are going to stay with us for the long haul and have opportunities for promotion within the company.

Financially it makes sense too – I'm proud that we are one of the best employers in Kunming – it would be harder to offer such attractive packages to employees in Shanghai. Finally, from the customer's perspective we could be anywhere in China. Our 400 phone number costs no more than a local call from all over China and our team is very well-traveled and knowledgeable about all of the business and tourist destinations in the country.

GK: What is the strangest or most memorable call ChinaONEcall has received?

GS: That's a tricky one, some of them are probably too sensitive to mention here. However, we once had someone in the US who needed to talk to his Chinese mother-in-law in Canada to arrange a surprise party for his wife. So the call went from North America to China and back to North America again via an IP calling card service. What should have been a very cheerful phone call turned into a screaming row as the wife overheard the conversation and got angry that her husband was secretly talking to her mother.

I and my team would like to serve as Interpreter in Chinese, if need be.

Hey. If you scatter thorns, don't go barefoot.
I am from Hungary and also am speaking English, tell me right I wrote the following sentence: "However more single is the intense bail that private venues tend to hedge on fund sales through confidential player and pr."