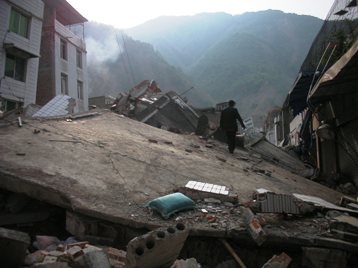 Editor's note: The following is a special report by Jo Egil Tobiassen, who visited the disaster zone around Wenchuan County in Sichuan last week.

Nearly two weeks has passed since the earthquake in Sichuan. The pictures rolling over the TV screens throughout the world do not lie. The disaster is a tragedy which cannot be explained by words. The death toll has passed 60.000 and keeps rising. Millions have lost their houses and family members.

But after spending a week in the disaster area one feels not only great sorrow but also great admiration for the people in the mountains of Sichuan. If one talks to the survivors, observes the rescue workers and listen to the words spoken about the future, the darkness is brightened.

In Yingxiu, a small town in Wenchuan County - the epicenter of the earthquake, we were invited to dinner by a handful of survivors. Everybody around the table had lost one or more family members and everybody had lost their house. Still, they would already talk about the future:

"Come back in some months and we will give you a house to sleep in."

"Yesterday we sat around this table and cried together. We agreed that although we are only simple 'laobaixing', common people - we have to be strong and look forward."

"We know the government is going to give us money to reconstruct our houses and lives, but we will refuse to accept the money. There are other people who need it more."

Who could possibly need the help more than people from Wenchuan?

As we were eating an aftershock suddenly shook the ground. I jumped to my feet ready to run and take photos. The others hardly noticed it and smiled at my inexperience. "Such a small earthquake!" they laughed. Minutes later a group of soldiers started carrying body bags past our table. They were coming from the local middle school around the corner. The bodies inside the bags were children. Again the hosts of the dinner seemed unaffected. 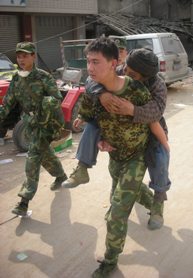 Daily life in these valleys has experienced a cruel change, I thought to myself. One person at the table noticed my concern and said: - The soldiers work day and night. They don't sleep, they don't eat. All they do is work.

And he was correct. The soldiers, the volunteers and the health workers pour into Sichuan by thousands. Risking their own lives and health they try their best to rescue and help as many as possible. Over 200 rescue workers have already died on rescue missions. It was impossible not to be impressed by their effort.

That same night we observed a battalion of rescue workers from Shanghai pull a living man from a collapsed building. It had been more than a week since the earthquake. Among the workers was a 20-year-old volunteer who had found the man. The young volunteer had spent the last 24 hours inside the building talking to the trapped man, convincing him to try to stay alive.

It was not the first person he had found and rescued. Ever since the earthquake he had walked the valleys searching and finding survivors. The last thing he told us was that he would go and find more.

Jo Egil Tobiassen is a Norwegian student occasionally living in Kunming. He covered the Sichuan earthquake for the Norwegian media. GoKunming thanks Jo for this contribution. If you would like to contribute to GoKunming, please contact us with your story idea via our contact form

After seeing hundreds of pictures of this disaster, I began feeling very guilty for not being in China and actually doing something, at least something, for the thousands of survivors who have lost their homes and loved ones.