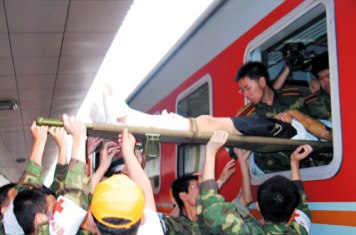 Today 243 people injured in last week's Wenchuan earthquake arrived in Kunming for medical treatment. As Sichuan's medical infrastructure feels the strain of tens of thousands of dead and hundreds of thousands of injured, the Chinese government is shifting 8,000 injured out of Sichuan to Chongqing, Shaanxi, Guizhou, Guangdong and Yunnan.

It is the largest shifting of injured since the Tangshan earthquake in 1976 that killed a quarter of a million people.

Hospitals including Stone Forest Tianqi Hospital are preparing entire floors of beds for quake victims. The hospital said it had been preparing more than 200 beds taking up three floors since Monday.

Located on Sichuan's southern border and home to a large Sichuanese population, Yunnan has made significant contributions to the relief effort.

According to Kunming media, as of 2:00 pm on Wednesday the entire province had donated nearly 370 million yuan (US$53 million) in goods and more than 338 million yuan in cash to the cause. Yunnan schools are also accepting children from Sichuan whose schools were destroyed or damaged in the 8.0 magnitude quake.

Haha Master at The Turtle Bar!