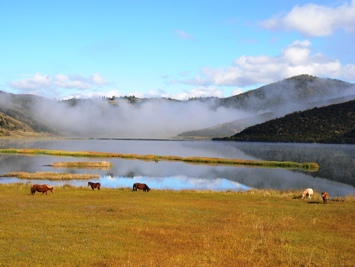 China's economic growth over the last three decades is unparalleled in human history, but the country's rapid modernization has come at a great environmental cost. As glaciers shrink, rivers dry up, lakes succumb to pollution and skies grow hazier, the environment has become an increasingly important issue to both China's government and its people.

As China has increasingly opened to foreign trade and investment it has also become more open to cooperation with international environmental non-governmental organizations (NGOs). Not surprisingly, Yunnan province was the first area of the country opened to international NGOs.

China is the world's sixth most biodiverse country, with geographically varied Yunnan province as the country's most biodiverse region. Recognizing Yunnan's importance to ecosystems in China and Southeast Asia, US-based environmental NGO The Nature Conservancy (TNC) set up its first China office in Kunming in 1998.

GoKunming sat down with Kunming native Jerry Chen, TNC Yunnan Program Deputy Director, to find out more about what the organization is focusing on in Yunnan and to learn more about its plans for the future:

GoKunming: What is The Nature Conservancy's main goal in Yunnan?

Jerry Chen: The Nature Conservancy's goal in Yunnan is to work with the government and other organizations to protect biodiversity.

Right now we're focusing on increasing cooperation with the provincial government, expanding the number of national parks in China, and developing a biodiversity preservation strategy. We are primarily focused on the rich biodiversity of northwest Yunnan.

GK: TNC worked with the Yunnan government on the creation of China's first national park at Pudacuo last year, what has the park achieved in its first year of existence?

JC: Pudacuo National Park has had two major successes. One is quite obvious – the protected area in Pudacuo is now 10 times larger than before. Just as important, tourism in the area has improved greatly, moving toward a more regulated model with industry standards. Prior to this, tour operators had very little accountability or incentive to protect the environment.

It is hoped that Pudacuo will serve as a model for future parks – the provincial government of Yunnan has plans to open more national parks in the coming years.

GK: Why should residents of Kunming and other cities in Yunnan and elsewhere in China care about biodiversity in Yunnan?:

JC: Biodiversity in Yunnan is extremely abundant – it is a 'gene bank' that creates the foundation for the region's natural environment. Yunnan has many animal species that have disappeared elsewhere.

Also, from a tourism standpoint, it is Yunnan's biodiversity that is one of the province's most alluring aspects. Biodiversity is one of the reasons why people think of Yunnan as being beautiful.

GK: What changes in governmental and popular attitudes toward the environment have you seen in the last few years?

JC: There's been a big change. Protecting China's natural environment has become increasingly important to the government and it has become a bigger part of the public consciousness.

GK: Will TNC be involved in any way in the Olympics this year?

JC: The Olympics are a great opportunity to spread the message of environmental protection. We are holding a series of Olympics-related events entitled "Natural China." Last month, Haydn's work was performed in multi-media concerts ("The Seasons") in Beijing and Shanghai. We also co-organized a "Nature Reserves of China, Through the Viewfinder" photo contest and exhibition with China's State Forestry Administration (SFA) and the Beijing Olympic Committee for the Olympic Games (BOCOG) that began in December 2007. Under the theme of "Green Olympics, Natural China" we will use the exhibition in Beijing as a platform for highlighting China's nature reserves and the work we're doing here.