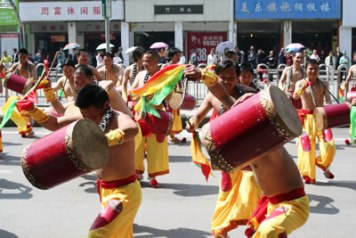 As with every Labor Day celebration, Kunming will be staging a parade – this year's theme is "Olympic Beijing, Tourist Yunnan"( 奥运北京•旅游云南). The mid-day parade (Kunming media reports are not providing a starting time) will travel 4.7 kilometers, beginning at the intersection of Dongfeng Dong Lu and Beijing Lu.

The parade will feature performances between its starting point and Huguo Bridge, passing by Dongfeng Plaza. Afterward it will wind around to Qingnian Lu, northward toward Yuantong Jie, where it will head east back toward Beijing Lu. The procession will then head south by Renmin Dong Lu, Baita Lu and Dongfeng Dong Lu before finishing at Tuodong Stadium's north gate.

GoKunming has received unconfirmable notification that tomorrow there will be protests at Kunming's McDonald's and Wal-Mart locations – including the McDonald's at Renmin Lu/Qingnian Lu on the parade route.

We are not sure how reliable the reports are, but should any of our Western readers find themselves near an angry crowd outside of a McDonald's or a Wal-Mart, we recommend keeping your distance – patronizing the object of a such a protest will likely be interpreted as opposition to the crowd. Hopefully the notification is merely a rumor.