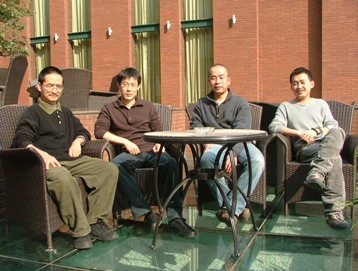 In the Chinese art world, the term the "Yunnan School" of art is an umbrella term covering all of the art coming out of Yunnan province, home to one of the most influential art scenes in all of China. As art moves away from the government's sphere of influence and toward an increasingly interested international art market a major diversification of themes and styles is taking place across the country.

What is unique about the art scene in Yunnan is that it can be generalized as a 'homegrown' art scene with a high number of locally born artists and relatively few Chinese from other parts of the country fleeing the megacities of the coast – although that is slowly changing, especially in Dali.

A new generation of painters is emerging from the so-called Yunnan school – a group of oil painters whose artistic talents were cultivated during their time at the Yunnan Art Institute – one of China's more influential art academies. This 'Kunming School' of painters which includes Chen Liu, Zhang Wei, Du Xi and Wang Jiwei was born in the 1970s and 80s and as a result grew up in a much more politically stable environment than their predecessors - many of whose works are heavily influenced by the turmoil of the Cultural Revolution.

GoKunming sat down with the four painters at Yunart Gallery, where they recently wrapped up a three-month exhibition. All four were as friendly and laid-back as one would expect. Here's an intro to each painter and their views on art: 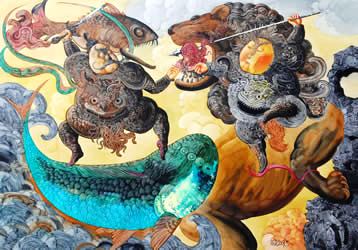 Realm of the Heavens - Chen Liu

Born in Kunming, Yunnan province in 1973 to two artists, creativity is in Chen Liu's blood. His father a famous painter and his mother an accomplished woodcutter, Chen started painting regularly in 1985. He graduated from Beijing's renowned Tsinghua Fine Arts Institute in 1996.

After graduation Chen returned to Kunming, where he has been painting as well as serving as a professor specializing in oil painting at Yunnan Art Institute.

Affected more by China's opening to the rest of the world than by the turbulent politics of the 1970s, Chen first became interested in art via American comics and Japanese manga – influences that he blends with his interest in the supernatural and classical Chinese stories such as Romance of the Three Kingdoms.

As Chen sees it, the fringes of reality are infinitely more interesting than the middle of the road. "I like extremes," he says "I can appreciate extreme beauty, such as the female form, but can also enjoy the ugliness of a gory scene in a horror flick."

Chen's paintings have been have been well-received around China and the world. His works have been featured in galleries in Beijing, Shanghai, Guangzhou, Chengdu, Guiyang, Taiwan, New York, Milan and Vietnam. 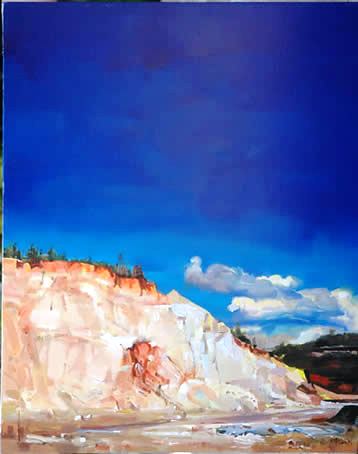 As a child, Zhang Wei preferred to spend his time alone, away from other children – painting was his escape. Born in Kunming in 1970, Zhang started painting in primary school at the age of seven.

After deciding to focus full-time on painting, Zhang studied at the Yunnan Art Institute under famous painter Chen Raoguang (陈绕光), father of fellow painter Chen Liu (陈流). Zhang says that while studying under Chen, he learned how to turn reality into art.

Zhang's aesthetic sensibilities are more in line with modern, industrialized China rather than the China of dynastic times when painters often used natural scenery as the inspiration for their brushstrokes.

"Sometimes a ripped-out side of a mountain is not enough for me, and I'll have to add a plane to the sky."

Zhang's paintings are often imbued with scenery and images from his home province of Yunnan. The artist said he frequently leaves his home in Kunming to search the Yunnan countryside for inspiration.

"I'm not going to go to a scenic place like Stone Forest though, I'm more likely to be inspired by seeing an animal getting slaughtered in a village. I like strange and scary paintings – I really like violence."

Zhang sometimes spends long periods of time between paintings or series of paintings.

"I'm interested in a lot of different things," he said, "which causes the themes of my paintings to change frequently. I don't like to relax too much – I like to keep a bit of an edge."

Zhang's works have participated in exhibitions in Milan, Shanghai, Beijing, Guangzhou and Kunming. 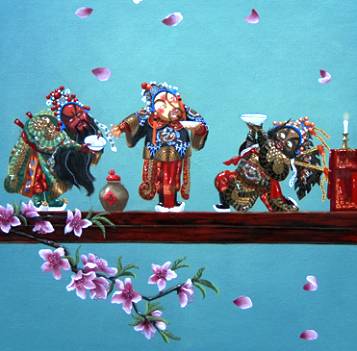 Born in 1980, Du Xi is one of the younger members of the generation of talented artists emerging from Kunming, with Yunnan Art Institute as the epicenter of this wave of creativity.

Du is one of the few painters in Yunnan to have spent time in the US – in 2005 he spent seven months attending his exhibitions as well as painting and exploring a country that was very different from his own. Whereas many Chinese artists would have stayed on, Du decided to return to his native Yunnan – which in many ways serves as his most important muse.

"America has friendly people, clean air and almost everything was beautiful to me," Du said, "But I quickly found it boring - I'm most interested in painting things that I'm connected to."

"As a child I was always interested in older things that had a link to the past, like my grandparents' old house, the different parks and temples around Kunming, these places give me inspiration and feelings – that's why I paint them."

"Modern painting is about individual expression – last year [2007] I tended to paint things connected to life today, but now I prefer to paint in a more traditional style – especially Peking opera, Romance of the Three Kingdoms and old symbols from ancient China," he said, "My paintings have moved to more of an emphasis on storytelling."

"A year ago, I needed to see what I was painting with my own eyes. Now I'm more into using my ears, my imagination, my dreams. Everything I'm painting now focuses on things that I'm imagining coming up with – it's much more comfortable for me this way now."

Du's works have been exhibited in Brussels, Los Angeles, Guangzhou, Guiyang and Kunming. 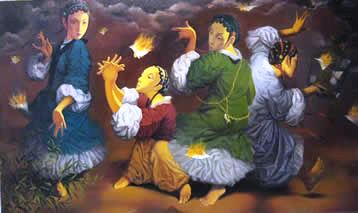 Wang Jiwei may have been born in the year of the dragon, but it is remembered better by other Chinese as the year in which Mao Zedong and Zhou Enlai died, the Gang of Four was arrested, and the Tangshan earthquake took the lives of hundreds of thousands of people.

Since Wang's birth, China has left its revolutionary fervor for a new path – where it leads is still unclear. What is clear is that in those three decades China has undergone a massive change unprecedented in any other country.

The sharp difference between the China of the 1980s and China since the 1990s has had a major impact on Wang. As China leaps into modernity and globalization, Wang prefers to look to the past for his inspiration.

"I like everything old – buildings, paintings, antiques and embroidery are all interesting to me."

A student of Chen Liu and Zhang Wei and former classmate of Du Xi, Wang took to painting at an early age and in 1997 began to study it formally.

Wang's paintings often feature a mix of Chinese and Western elements. Tradition is a consistent theme in Wang's paintings, as is his love for all things Yunnan.

"Yunnan is very different from the rest of China – it's on the periphery, the fringe."

Wang's paintings have been featured in exhibitions in Guangzhou and Kunming.

If the exhibition recently closed, where can I go to see the pieces?