Winging it in Yunnan

Early last Wednesday morning, GoKunming met up with a few friends on Jiaoling Lu for a trip out to Anning. Red-eyed and sleepy, we all needed a coffee or two, but none of Kunming's cafés had opened yet. Packing into the van we were to take on our trip, there was a slightly giddy feeling reminiscent of skipping school.

There was also a palpable feeling of nervousness, perhaps even dread, of what was to come. Our minds were on something far more intimidating than Kunming morning traffic – we were all preparing to go paragliding for the first time.

Paragliding – known in China as huáxiángsǎn (滑翔伞), or 'gliding parachute' – is a relatively new sport in China. It first began to be promoted in China about ten years ago but has yet to attract the numbers of die-hard pilots found in the US, Europe or even South Korea and Japan.

"Paragliding is one of those sports like Kung Fu or bicycling that can become a way of life for those that enjoy it," said Mike Fougere, the internationally-certified tandem pilot and instructor who would be taking us up into the sky later that day. Poring over indecipherable (for us) wind charts for the area around Anning's Longsan mountain, Mike seemed pleased with what the glyphs were telling him about what the day had in store for us windwise.

"It's been so windy lately it's almost been discouraging," Mike said, recounting a recent day of tandem flights that he had to cancel due to excessive winds, "But today should be just right."

After making it out of Kunming we stopped in Anning's hot springs area for some bananas and water before heading up toward the mountain that we were all going to launch off of. Nervous smiles belied the churning stomachs beneath the veneer of calm that we were trying to maintain. 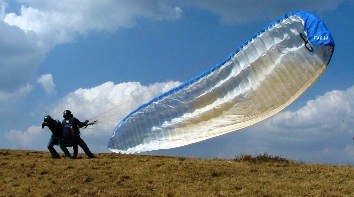 After a bumpy ride to the flat top of Longsan Shan, we disembarked and ate bananas as Mike planted a wind indicator and spread out a 43-square-meter nylon airfoil, which he refers to as a 'wing'. After some deliberation, we determined who would be the first to take to the skies.

GoKunming techie Matthew was the first to strap into the paragliding harness, which allows for semi-easy running during takeoff and quite comfortable seating once airborne. Mike, originally from Canada, has piloted around 500 tandem flights over the last three years at a Quebec City paragliding school (aerostyle.ca) and has been logging more than 200 hours annually in solo flights in Asia and North America.

Over the last two springs, he has been exploring ideal areas around Kunming for paragliding – in addition to Anning's Longsan, he has also tried out Xishan in Kunming and Liangwan Shan in Chengjiang, about 50 minutes' drive from Kunming.

After a quick briefing on the finer points of taking off and triplechecking all of the key points of the harness, Mike waited for an ideal wind and then instructed Matthew to start moving forward, toward the edge of the mountain's flat top. Wind direction wasn't acceptable for the pilot, so Mike decided to abort the attempt, which would happen a couple more times. On the fourth attempt all was good and Matthew and Mike took to the sky.

Meteorological knowledge is crucial to being a good (and safe) pilot and understanding how the sun heats the ground and creates hot air currents in specific areas is how you find thermals - and go up. After much fruitless searching, the winds smiled upon the wing, sending pilot and passenger about a kilometer straight up in a very short amount of time. For us on the ground, nervousness was giving way to eagerness.

After Mike and Matthew landed atop the mountain which they had launched off of half an hour earlier, the rest of us took turns making the launch. Your correspondent and another friend both ended up missing the big thermals, but the tour of the face of the mountain was far from disappointing - we were flying, after all.

The last two in our group ended up catching some major thermals, quickly shooting up to nearly four kilometers above sea level (see video above). Both times the wing was nearly too small to see without binoculars from the top of Longsan Shan, with the pilot and passenger spending around an hour gliding across the sky.

At one point the instrument that measures altitude and rate of climb was emitting a high-pitched noise that meant the two were ascending at a rate of six meters per second. Both of the lucky high-fliers were slightly dazed but happy to have flown upon returning to terra firma. 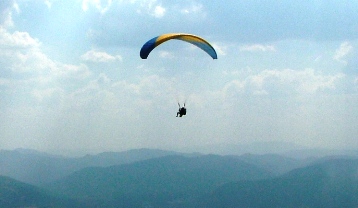 Should you decide to try paragliding it is recommended to fly with an experienced pilot who is certified by a country with a developed paragliding community. Hiking boots, sunscreen, a windbreaker and plenty of snacks and water are also recommended.

Mike Fougere is a Hang Gliding and Paragliding Association of Canada (HPAC)-certified paragliding instructor based in Kunming. He has been paragliding for more than 10 years and has been involved in various other airsports and windsports since a young age. He is available – winds permitting – to pilot tandem paragliding flights around Kunming at a rate of 300 yuan per person (plus transport expenses). Mike can be contacted at mike4g_air(at)yahoo.ca or (+86) 15825256431.

Congratulations to Mike for bringing the sport of Para-sailing to Kunming. As a Canadian pilot, I can attest to the thrill of flying and para-flying is an economic way to start - then, you'll want to progress to sailplanes, the ultimate way of sport flying. I encourage everyone to give Mike a call (and I don't even know him).
Thanks Chris for an interesting article.

Hope you come along sometime...

There is no doubt that a rigid wing sailplane has more preformance in speed, altitude and glide distance,
although,

I personaly know 2 airline pilots that paraglide because of it's simplicity.You feel as one with your wing and nature.

Reason for learning to Paraglide: Since my earliest memories, I have felt the need to be in the air and flying. I believe paragliding is a more true form of flight than anything involving an engine. A paraglider is at peace with the sky.

2.) The cheapest, simplest, and quickest to learn airsport, with zero mechanical components to fix, maintain or break down. A wing, a harness and you.

3.) Portable, light equipment that can be checked on an airplane and hiked up a mountain. A truly unique way to travel and experience the world.

4.) The only way to fully explore and experience the silent, chill magic of the clouds, and the invisible thermal world unnoticed above our heads.

5.) Flying in a plane is like swimming in a boat- get on a paraglider and out there in the airstream!!

6.) If you love mountain sports and the outdoors, only Paragliding allows you to explode your vision and experience of mountain landscapes into a rich, 3-dimensional understanding.

7.) If you have ever watched the birds and envied them, dreamed of stepping off a mountain and floating away freely into the wind, this is your chance. You are lucky enough to be part of the first human generation ever to realise a dream as old as mankind- personal, silent, portable aviation that allows the brakelines on your hands to act as your wings, and feel the wing as an extension of your body.

8.) Paragliding allows you to choose everything from the strongest burst of adrenaline to the most peaceful meditation, often on the very same day.

9.) Free flight is probably the most intellectually challenging, complex and most rewarding thing you'll ever do, and your learning curve never stops going.

10.) Ever looked from an aeroplane and wished you could walk on the clouds?

Deep down, you've always wanted to fly, haven't you?