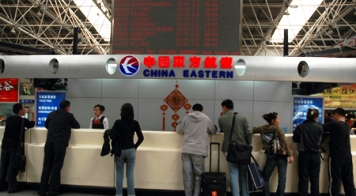 China Eastern Airlines and its Yunnan subsidiary held an emergency meeting this week regarding what appears to be an organized protest by the airline's pilots in Kunming.

On Monday, 14 planes leaving Kunming for destinations elsewhere in Yunnan turned back, with pilots citing bad weather as the reason, despite normal weather conditions at all the airports in question.

Officials from China Eastern's Shanghai headquarters and its Yunnan subsidiary met with 50 pilot representatives in Kunming on Wednesday for closed-door talks that lasted more than three hours, according to Kunming media reports. According to some Chinese media reports, the pilots involved are facing lifetime bans from flying on the mainland.

The apparent strike is the third major protest by pilots in China in the last month. On March 14, 40 Shanghai Airlines pilots called in sick. On March 28, 11 pilots from East Star Airline in Wuhan requested sick leave.

China's aviation industry is currently expanding flights so quickly that the supply of pilots cannot keep pace. According to a report on the website China.org.cn, the problem is expected to intensify in the coming years:

In 2004, when China's first private airline, Okay Airways, was founded, China had about 10,000 pilots flying 700 airplanes. Private capital has since poured into the industry. By 2010, China expects to have 1,250 domestic commercial jets, which will require at least 6,500 more pilots.

Domestic aviation schools train only 600 to 800 pilots each year, so private companies have frequently been forced to headhunt for more pilots.

The short supply of pilots has led to state-owned airlines including China Eastern to force their pilots – who are not allowed to form labor unions – to sign 99-year contracts under which a pilot must pay its employer compensation ranging from 700,000 to 2.1 million yuan if they quit, the report said.

Several lawsuits have been filed by disgruntled pilots in the last two years, but none have made it to court.