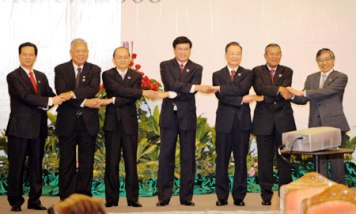 Today the prime ministers of China, Laos, Myanmar, Thailand, Cambodia and Vietnam and the head of the Asian Development Bank formally inaugurated the final link of the so-called "north-south economic corridor", a 1,800-kilometer (1,100-mile) road network connecting Kunming with Bangkok.

The former opium smuggling route which now links the Greater Mekong Subregion (Yunnan, Myanmar, Thailand, Laos, Vietnam and Cambodia) - or GMS - will dramatically improve road connectivity in one of Asia's most pristine and poorest regions. China is expected to send more tourists to the area while also bringing in natural resources and other commodities from Southeast Asia to feed its ravenous economic boom.

While speaking at the GMS summit, Chinese Premier Wen Jiabao (温家宝) called on GMS members to work together to improve the region's transport infrastructure, streamline transport and trade and increase rural development.

The road network is expected to increase Chinese investment in the region – especially in Laos, where the government has given a Chinese company a 50-year lease for a major tract of real estate near the Laotian capital of Vientiane in exchange for the building of an athletic stadium. Another Chinese company has been given 30-year rights to construct and run a large casino compound. 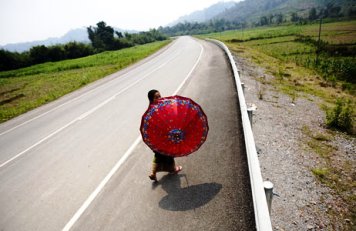 According to a Xinhua report, trade in 2007 between Yunnan province and the 10 member states of the Association of Southeast Asian Nations (ASEAN) reached US$3.03 billion, up nearly 40 percent over 2006.

Recent rapid growth of trade with ASEAN has made the region Yunnan's largest trading partner. According to Kunming customs statistics cited in the report. Yunnan's exports to the region were up 32.9 percent, reaching US$2.17 billion.

Yunnan is preparing to serve as China's gateway to ASEAN as the two emerging economic regions prepare for the China-ASEAN Free Trade Area (CAFTA), the first phase of which will launch in 2010. CAFTA will reduce and eliminate tariffs on goods moving between the two regions, creating the world's largest free trade area in terms of population.

i wonder who comes up with these official handshake ideas...

Ha, kinda reminds me of the theme song at the beginning of Fat Albert cartoons

awww... wen jiabao is so cute.

just got back from bangladesh where everyone is talking about china, esp trade links between china and myanmar and the potential for huge oil drilling expansion in the bay of bengal. this little project is making waves across the subregion. even the rickshaw drivers know about the road, and it doesn't even GO to b'desh.