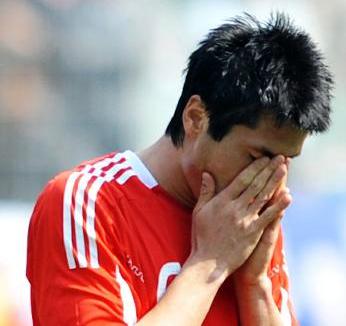 China was presented with a golden opportunity to win yesterday's 2010 World Cup qualifier match against Australia in Kunming, but it was Aussie goalkeeper Mark Schwarzer, not China's Shao Jiayi (邵佳一), who would emerge the hero after blocking Shao's 88th-minute spot kick – the match resulting in a 0:0 draw.

After yesterday's 2:0 upset of Iraq by Qatar, Australia has four points and leads Asia's 'group of death', with China in third place behind Qatar with two points. China has four more matches left during the qualifying stage and still has a chance of qualifying.

Aside from maintaining Australia's leading position in its group, yesterday's draw was a moral victory for the Socceroos, who went in to the match with five of its starters including Harry Kewell and Tim Cahill sitting out due to injuries. Australia was also concerned about the effects of Kunming's 1,900-meter altitude on both its players and the ball - Australia coach Pim Verbeek was critical of the choice of Kunming to host the match, saying his players had little time to adjust to the altitude and expressing concern about the possibility of 'floating balls'.

Ironically, it was China – which had been training in Kunming for weeks – that had problems with floating balls. In the second half China had several opportunities near the Australian goal that were wasted when passes sailed over the heads of open men. 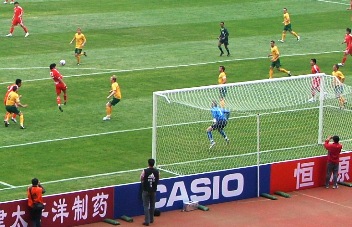 With four goal attempts compared to Australia's one, China was increasing its pressure on the Australian goal, culminating in a penalty kick after goalkeeper Schwarzer was hit with a foul on Qu Bo (曲波) in the penalty area. The thunderous noise generated by the home crowd vanished when Schwarzer stopped Shao's kick with his feet, then pounced upon the ball. Shortly afterward, Australia's David Carney had an opportunity to win the match, but was unable to redirect Mark Bresciano's cross into the Chinese goal.

After the game, Shao apologized for missing the spot kick, which, had it made it past Schwarzer, would have likely given China a victory, putting it atop the group with four points.

Asia's 20 teams are divided into five groups, with the 10 winners and runners-up reaching the final group stage. Four teams will advance from the final group stage to the 2010 World Cup in South Africa, with the two next-best teams playing for the chance to play the winner of the Oceania group for another berth.

"I truly feel it was regrettable, I'm sorry to everyone," Shao told Chinese media, "As it was, we totally had an opportunity to win this game, but the spot kick didn't go in... now all I can do is apologize to my teammates and the fans."

"You saw it today, we gave it our all," he continued, "You could say we had a definite advantage – during the game there were several opportunities, it's a pity we were unable to seize them."

Think this was the worst football match I've ever seen. Australia had no ambition and China lacked incisiveness. I counted 3 shots on goal in the whole game including the penalty (which shouldn't have been given). Bresciano didn't look like an international footballer and laboured against a pretty average defence. Lucas Neill and Mark Schwarzer showed they were players of class, Neill especially looked calm when his team mates couldn't hit even the simplest of passes. China's crossing was woeful, even when they exerted some pressure late on their delivery was amateur.

If either team qualifies for South Africa, they will need to inject some urgency and talent into their team. On this showing they'd be on a flight home after 3 games.

To be fair to the Australian team -- they were missing all their recognised strikers and playmakers: Cahill, Kewell, Emerton, Kennedy and Djite were out and Thompson gone after 10 minutes.

I thought Jade North and Lucas Neill played very well and Brett Holman, Carl Valeri and Michael Beauchamp were commendable. Despite their efforts, Australia were never going to be a potent scoring force.

China's tactics throughout the whole game were negative, sitting back in both halves, especially for the first 30 min of the game. Methinks they showed a weak Australia side too much respect.

you were clearly not at the same game we were. !!

There were very trying conditions -(ie playing away from home, the altitude, foreign refs - favouring the home side (vis - the lack of a red card against the bloke that chopped our archie) - 18 hours on a plane/transit for many players from the UK/Europe) plus being surrounded by the chinese red army and their attack dogs.

It was a sterling effort from the guys. Most people that we discussed the game with -( there were plenty) -reckoned that it was a great example of the beautiful game, ie you can have a great 0-0 draw -it was in the balance to the end.

I reckon every one (except you) was pretty pleased with a point away from home - we are in a tournament played over many games, not just one.

Suffice to say dont expect to see the same tactics in the return game.

If its high scores you want; I suggest you hook up with the basketball ball crew - they have heaps in their games

Any luck selling your over priced tickets?

I think overall the game was played in the right spirit, although there were some late tackles which FIFA I must say is trying to stamp out under its "Fair Play" initiative. What can you say about the Australian goalkeeper, he proved once again to be world class. I look forward as a neutral to following the course of the two teams in the rest of this group, and of course the return match in Sydney in June, though I understand there will not be dogs allowed in the stadium due to health reasons. See many of you at the FIFA congress in May!