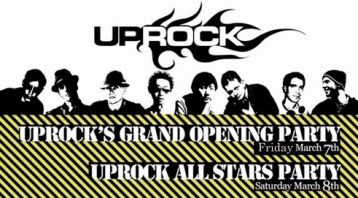 Kunming is known around China for having nicer weather and bluer skies than most cities in the country, but visitors to the city often note that the city's club scene pales in comparison to cities like Shanghai and Beijing, where parties featuring top DJs from around China, Asia and the rest of the planet are commonplace.

A group including Kunming DJs Shonny and Echoo is launching a new club – Uprock – this Friday. Uprock is Kunming's first attempt at a nightclub that eschews bolted-down stools and the ubiquitous whiskey and green tea for an open dance floor and a focus on DJ skills and... music.

Uprock has also enlisted the assistance of Kunming-based UK native DJ DSK who is serving as the club's music and events director. Last year DSK was been cutting wax all over China and Asia, but this year he says he plans on staying in Kunming to focus on new projects, including turning Uprock – and Kunming – into established stops on the Asian club circuit.

"I've been DJing around China and Asia the last few years, now I want to concentrate on doing things here in Kunming, including recording," DSK said over tea in the nearly complete Uprock. "Right now I want to be able to manage a place and record."

The longtime Kunming resident said that Uprock is an attempt to do something different in a city filled with cookie cutter clubs that tend to copy the most successful club at any given moment.

"Uprock is different because it's a venue that concentrates on the music instead of gimmicks," he said.

"The only way to have a proper club is to have proper DJs and proper music. Our goal is for Uprock to be respected for the DJs that perform here and the music played here. I want to prove that you can play good music and make money."

The two-level club is located above a row of piano stores about 50 meters south of the intersection of Xichang Lu and Xinwen Lu, just a stone's throw from Kundu, click here for a locator map (in Chinese).

This weekend Uprock will celebrate its grand opening with two nights of parties featuring live turntablism by DSK and Mr Stokes, who moved to Kunming recently from Shanghai, where he was involved in the Bananas Sound System. The second night is being billed as the 'Uprock All Stars Party', in which DJs Kris, Shonny, Echoo, Jezz, Jiang Nan and Mr Stokes will play sets upstairs while DJs Christian, Menace and DSK perform in the downstairs lounge area. The first fifty guests each night will receive a free Uprock CD – click on the link below for a mix by Uprock DJs.

Cant wait to hear Stokes set, come along check it out . Its gonna be

i never heard the esteemed Mr Stokes play when i lived in Shanghai - but i hear had quite a following - should be worth trying to catch the set...