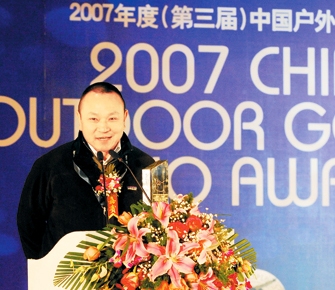 Kunming native and accomplished explorer Jin Feibao was awarded a 2007 Golden Rhinoceros Outdoor Award in Beijing on Sunday for "Outdoor event of the year" – an award commemorating his visiting both of the Earth's poles and each continent's highest summit in the 19 months from May 2006 to December 2007.

The award is Jin's second consecutive Golden Rhinoceros – last year he was awarded a Golden Rhino "Breakthrough award". This year is the third year in which the prize has been awarded by China's top mountain climbers and adventurers to the year's most outstanding outdoor adventurers.

"I'm extremely happy to be able to be able to repeat as a Golden Rhinoceros award winner this year," Jin said. "For me, this is the ultimate motivation and support."

In 2007 Jin ascended each continent's highest peak: Everest/Qomolongma in Asia, Kilimanjaro in Africa, McKinley in North America, Aconcagua in South America, Elbrus in Europe, Kosciuszko in Australia and Vinson in Antarctica. In addition to climbing these seven peaks, Jin hiked to the North and South Poles, at one point falling through thin ice into icy arctic waters while trekking toward the North Pole.

During his travels, Jin made daily phone calls back to his friends and family in Kunming, which were republished with permission on GoKunming. Jin told GoKunming that in addition to learning about different places around the world, he discovered the extent to which global climate change is affecting the world's most delicate ecosystems.

Jin is expected to be part of the Olympic torch relay team in Tibet this year.

"I may be the first Chinese to accomplish this"

"Today my mind has gone numb"