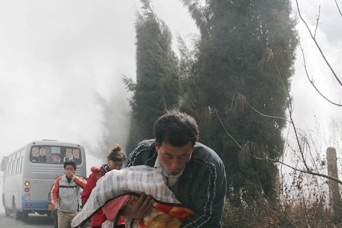 China's State Administration of Work Safety spoke up on Friday regarding recent large-scale spills of sulfuric acid in Yunnan, criticizing the state of the country's chemical transport and directing the blame at chemical logistics providers, according to a Xinhua report.

The Administration said on its website that the state of safety in chemical transportation in China was "grim", asking local authorities nationwide to learn from three accidents in the last three weeks in Yunnan that have resulted in more than 70 tons of highly toxic sulfuric acid being released into rivers and potentially poisoning local water supplies.

On February 11, a tanker truck owned by Dali Zhongyun Transportation Trading Co that was carrying 30 tons of sulfuric acid plunged into the Mojiang River in Dali Bai Autonomous Prefecture in northwestern Yunnan, dumping its cargo into the river. Only five hours later, another tanker truck – also owned by Dali Zhongyun – overturned near the Xingsu River, injuring two and releasing 24 tons of sulfuric acid into the river.

On January 28, less than two weeks before last week's accidents, a tanker truck was part of a pileup on the old highway connecting Anning with Chuxiong, roughly 51 kilometers outside of Kunming. The truck leaked 17 tons of sulfuric acid. Cleanup crews dumped 20 tons of lime on the spill, which created a massive cloud of smoke (see photo above) that caused another accident involving five cars.

According to the Xinhua report, the State Administration of Work Safety blamed January's accident on the tanker being overloaded and its driver suffering from long work hours.

September 23, 2021 "We're looking for foreign teachers who have the passions for working with elementary & middle school students to assist in multiple levels. If …"
Living in Kunming DasIstAoWPhOL