Shaxi was, until recently, best known for its more than 1300 years of history as a trading post on the old Tea Horse Road. This small town used to be an important place, situated about halfway between Dali and Lijiang on the ancient trading route. It used to be inhabited by many different Yunnan ethnic groups, today about 85 percent of the population is of the Bai ethnic minority.

As such, Shaxi has always been a conduit for cultural exchange – historically conducted via the horse caravans passing by, and today the market days still attract minority people from surrounding villages.

Recently, on May 1, a surprisingly modern place for cultural exchange opened up in this picturesque town. A well-known chain of bookstores opened its fifth rural branch in ancient Shaxi, in the middle of the global Covid-19 pandemic. How come such an urban enterprise landed in such insecure times, in such a rural setting?

Qian Xiaohua founded the first Librairie Avant-Garde bookshop in Nanjing, 24 years ago. As the son of farmers, he was concerned about traditional village life disappearing, as people move to the cities for work. In recent years he has taken it upon himself to scout the remotest areas of China, looking for places where he could open up bookshops — specifically aimed at serving ethnic minority groups, by reconstructing public spaces where the cultural life of the countryside can be conducted. His search brought him to Shaxi in 2016, and his visit left a deep impression — the picturesque landscape and an area rich in history and ethnic minority culture.

In collaboration with the local government, he eventually settled on a perfect location — a deserted cob-walled granary with a 20 meter high tower used for curing tobacco leaves nearby. The buildings are situated in the quiet and natural surroundings of Beilong village, located on the banks of the Heihui river, a Lancang tributary. Beilong village sits just outside Shaxi proper.

Qian was particularly attracted to the granary's function as a bearer of communal memories and the village's history – he decided that he would transform the buildings into a spiritual storage space and a tower of poetry.

The remote location makes it an interesting choice for such a destination. From the Dali and Lijiang airports, it's two-and-a-half hours by car to reach the village. Which poses the question: who on earth is going to visit an obscure transformed agricultural structure filled with books?

Architect Huang Yinwu is best-known for working on Shaxi restoration projects over the past 20 years. He was taken with the idea and took to restoring and transforming the two buildings, which took three years – the longest restoration from all the Librairie Avant-Garde bookstore projects. 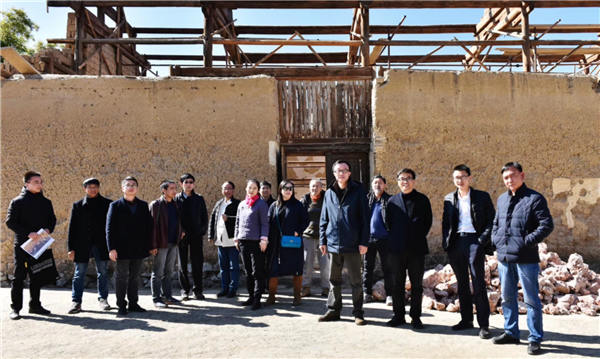 All of the rural Librairie Avant-Garde bookstores are renovated existing structures, blending in with the local landscape and culture. Part of the tiled roof was replaced with glass, allowing natural light in. The sunlight moves around the space with the movements of the sun as the time of day progresses. The design is smart and discreet, keeping the granary's original structure intact but creating a new space and atmosphere that befits its new purpose as a bookstore. The design also includes a new café, built in the traditional cob wall construction style with local workers. 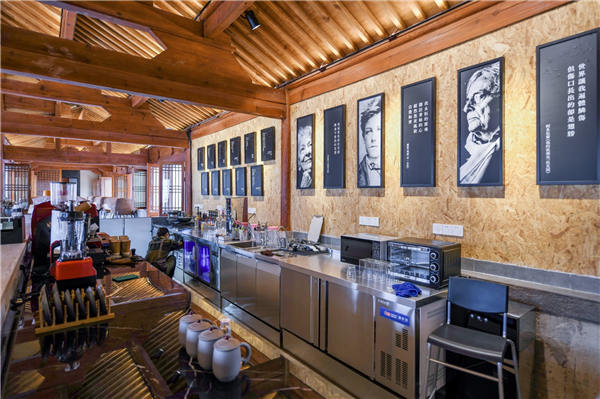 The most stunning feature of the bookstore is the Poetry Tower. A fan-shaped wooden stair, attached to a single pillar, leads the visitors up alongside the black and white portraits of famous poets, culminating in a a bird's-eye view of the village below. 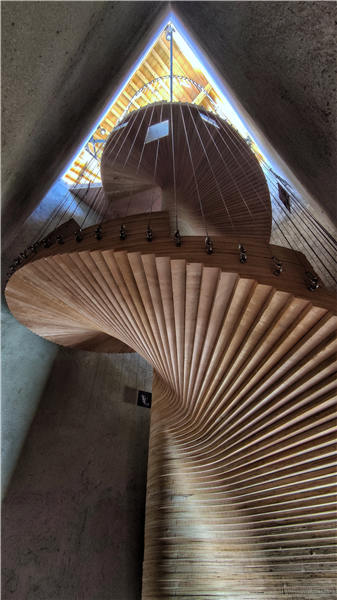 Since the opening, the shop has had more visitors than expected, from as far afield as Taiwan. Besides tourists, villagers like to visit the bookshop and then particularly older people and children.

The bookshop not only sells literature and poetry but also books about the history and geography of Yunnan and nearby places such as Dali, the Tea Horse Road and ethnic minority customs. Books in Tibetan and Naxi Dongba script are also for sale, as well as local souvenirs.

Guesthouse owners in nearby Shaxi are hoping that the Librairie Avant-Garde will breathe new life into the local tourist trade, which has suffered badly from the Covid-19 restrictions over the last few months.

Economic stimulus aside — the new bookshop has over 1,000 poetry collections, surpassing all other branches and even the flagship store in Nanjing. Qian picked the best poetry collections and the best books of other categories from his main store in Nanjing for Shaxi — two trucks traveled for 48 hours before reaching Beilong. Qian has plans to invite poets to the bookshop in Shaxi. He hopes that recitals, the picturesque landscape and the slow pace of village life will bring inspiration to his visitors, and solace for the soul that lives in turbulent times.

June 22, 2021 "I sell nearly new washing machine (bought only one year ago) It can handle 5.5kg of laundry and it's fully functional - no problems at all. I will …"

June 20, 2021 "We are looking for full time or part- time English teacher. Requirements: 1. Better be native English Speaker; 2. Teachers can be good with kids. Pati …"
Living in Kunming livinginchina