Lieuwe Montsma is a long-time Kunming resident and cycling enthusiast. He has travelled stretches of the Old Burma Road by bicycle and by motorcycle. This is the first installment of his cycling adventure, the second part, where he cycles along the Nujiang, can be found here..

If one wants to cover any kind of distance in Yunnan by bicycle, then there always will be one or more serious climbs. Maybe not a big issue for most cyclists, but my cycling companion and I are getting older, so we looked for some stretches without too many mountain ranges to cross. Basically, this meant staying in the valleys and following the rivers. The idea was to take public transport up the valley and then follow the flow of the river back down. Most river valleys in Yunnan are however rather narrow and rarely have a road following the river. We started scouting for suitable stretches.

From memory, I knew that the upper Nujiang valley would be suitable. In 2001 and 2002 I frequently travelled to that area for work, and I had been back there in 2012. Another area I knew well was the Pijiang river valley (沘江, sometimes spelled Bi or Bijiang), about halfway toward the Nujiang valley. I first visited in 2008, and more often between 2013 till 2017 on work-related trips. I had never cycled there, but as I recalled, it would be a pleasant road for cycling.

Our intention was to cycle for about two weeks. A window of good weather opened at the end of October, and off we went.

We spend one day travelling by long-distance bus to Yunlong, the centre of the Pijiang region, where we arrive around 8pm. We take our bikes down from the roof of the bus and set out for a hotel. Unfortunately, most hotels are booked because a big conference for military veterans is happening in town. A round of phone calls later we end up at the most luxurious hotel in town — at a price way above our budget, but at least with an elevator — but we don't have a choice.

Cross that bridge when you get to it

A particular feature of the Pijiang valley is the many ancient bridges crossing the river and its tributaries, scattered north and south of Yunlong. These bridges come in all forms and shapes. There are metal chain suspension bridges, wooden cantilever roofed bridges, rattan bridges, and nowadays also bridges constructed of metal cables. There is even an adobe bridge, high up on the Jiancao tributary. Besides these permanent fixtures, there are seasonal bridges. These are made of bamboo or wood and get swept away every rainy season. The valley is pleasant to cycle and there are various other sightseeing spots such as the old village of Nuodeng and the Taiji viewpoint, where a bend in the river forms a perfect yin-yang symbol.

Get on your bike

The next day is our first proper day in the saddle. We head north — not yet going with the flow, but rather going against it. Our first destination is Baishi village, some 50 kilometres up the valley. Going back down to Yunlong from Baishi would allow us to cycle up one or two of the Pijiang tributaries the next day. The last stretch of the road to Baishi is a long climb. We arrive at the entrance of the village apparently looking so exhausted that some local youth deems it necessary to give these two laowai old-timers a free tin of Wang Lao Ji, to boost our energy. The tiny and quiet village boasts three hotels and we stay at a simple, clean and brand place one for a mere 50 yuan — checking in just before the rain starts.

On day two we are ready to go with the flow. After waiting for the morning mist to clear, we follow the river down the valley. The long climb from yesterday is now a long descent. We made good speed, only stopping to take pictures of the landscape with the low-hanging clouds. 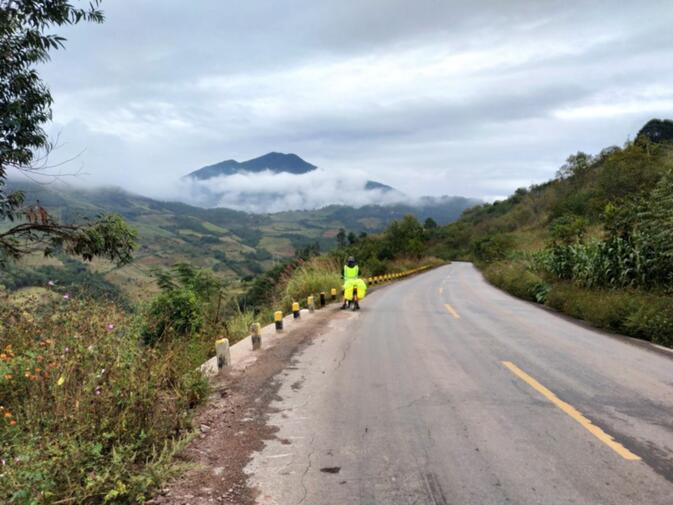 Around lunchtime, we arrive in Changxin, where it is market day. Carefully pushing our bikes through the crowd, we reach a noodle place and eat our fill, before pushing on.
That afternoon it rains again. The last kilometres we cycle through a steady drizzle, back to Yunlong. Unfortunately, the poor weather derails our plans for side tours up the tributaries.

The weather forecast for the coming day is unclear, and I knew the road ahead does not have shelter anywhere. Instead of cycling, we take a day trip to the village of Nuodeng, six kilometres outside Yunlong. It is located on a steep slope and only accessible on foot.

Nuodeng is a well preserved ancient town that prospered because of its salt well. For some time, it was the administrative centre for the Pijiang valley and more important than Yunlong. Nowadays it's a well-known tourist spot and famous for its locally produced salt and ham. The latter is, surprisingly enough, less salty than usual in Yunnan — it can match Serrano and Parma ham in taste. We purchase some of this excellent ham and have it sent to Kunming, as we don't want to cycle around with a leg of ham strapped to the bicycle.

When we visit Nuodeng is pleasantly quiet and without other tourists. We climb all the way to the top to see the recently restored old Yuhuang temple complex — a tasteful job well done, not a rebuild in standard Han style as is so often the case in Yunnan. 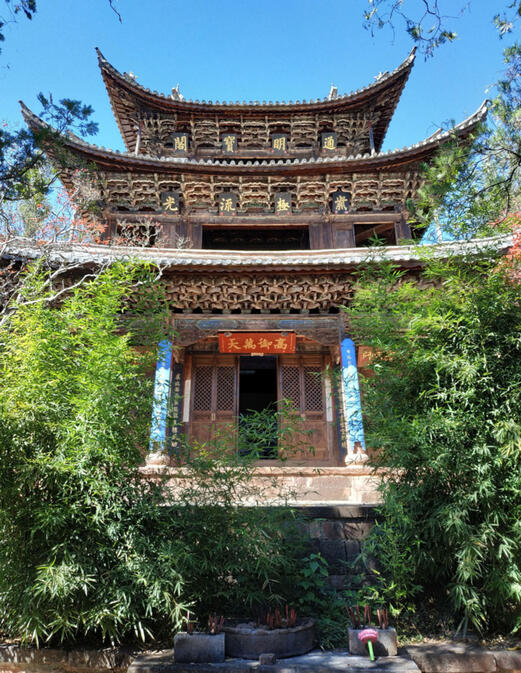 They have left the original ceiling with paintings of the Bai zodiac intact, a unique feature of this building. 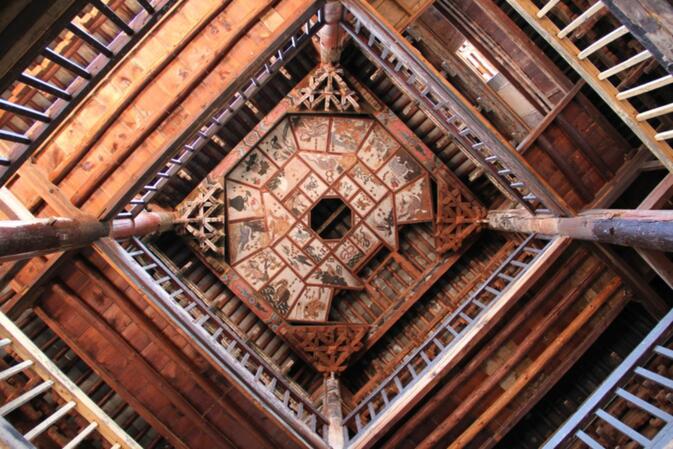 They have also restored the honour gate at the old academy to its former glory — after it was enveloped in scaffolding for years following an earthquake.

The weather clears, and it is even getting hot, despite it being late October.

South of Yunlong the road closely follows the Pijiang. To my surprise, a new road has been built, replacing the old one-lane road that was under construction when I first visited Yunlong in 2008, which replaced the previous poorly surfaced dirt track that I travelled on back then. Now it is a double lane smooth tarmac road all the way to Nanxincun, only interrupted by a landslide. 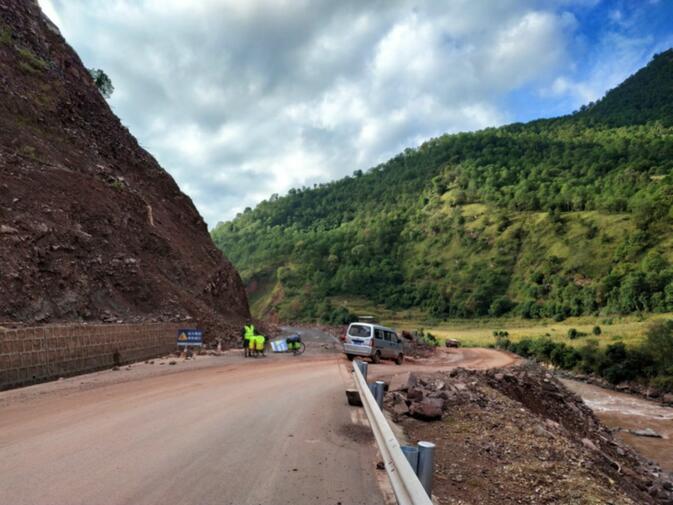 After a quick look at the old Huimin double metal chain bridge, we continue to our lunch stop in Dalishu village. From here, the road is concrete all the way to the bridge spanning the Lancanjiang. 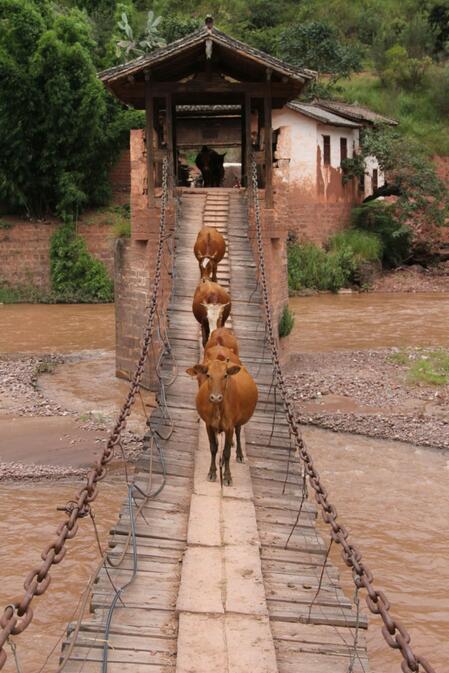 Some five kilometres before the Pijiang and the Lancanjiang rivers converge, the old Burma Road comes down the mountain from Dalishu and Yongping on the other side of the mountain. 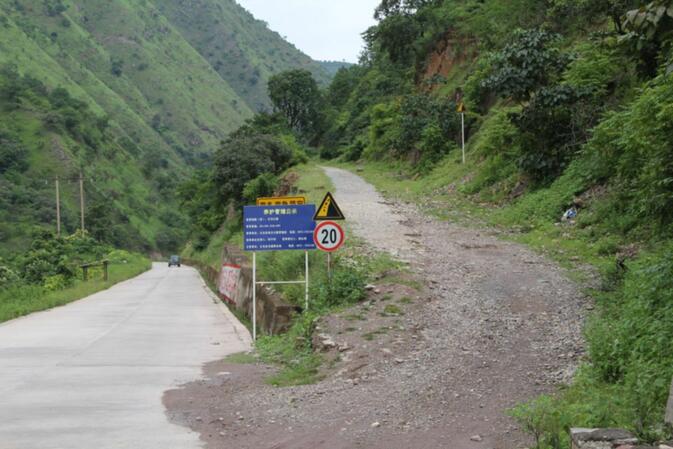 I had previously cycled this stretch of the old Burma Road, in 2012. The Burma Road from here on has been completely upgraded and replaced because the original river crossing has disappeared under the water in one of the many reservoirs of the Lancanjiang.

The 90 meter New Gongguo Bridge was completed in November 1940. On this picture from 2008, one can see the original cobblestones of the Burma Road in the foreground. The bridge has now disappeared in a reservoir. In the background, one can see construction work of the new road, much higher up the mountain. 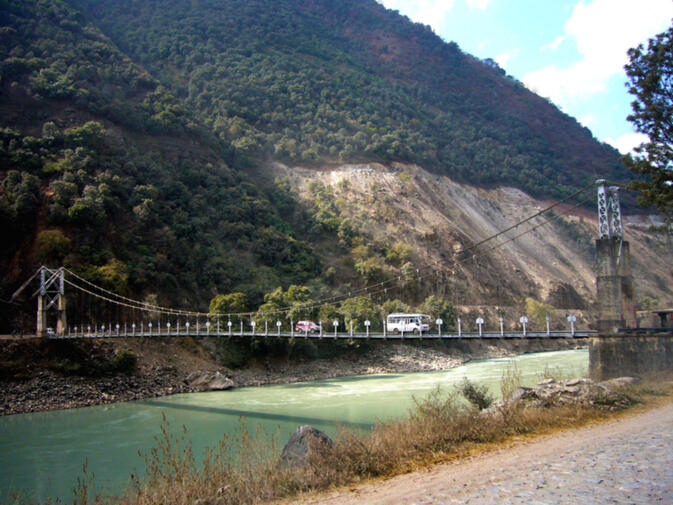 When we visit the same spot as above, the New Gongguo Bridge stands under the water level of the reservoir. Note the difference in colour between the Lancanjiang and the Yunnan red soil colour of the Pijiang.

The Lancanjiang valley is narrow and traps the heat of the sun, so after crossing the river we cycle from one soft drink sales spot to the next, following the new road down the valley. At some spots, one still can see brief stretches of the old Burma Road next to the Lancanjiang.

Both the Lancanjiang and the Nujiang have a microclimate that is much hotter than the surrounding area because they are so deep cut and low. Therefore you will find fruit here that cannot grow normally in these areas. Note the dust kicked up by the heavy trucks that pass here. 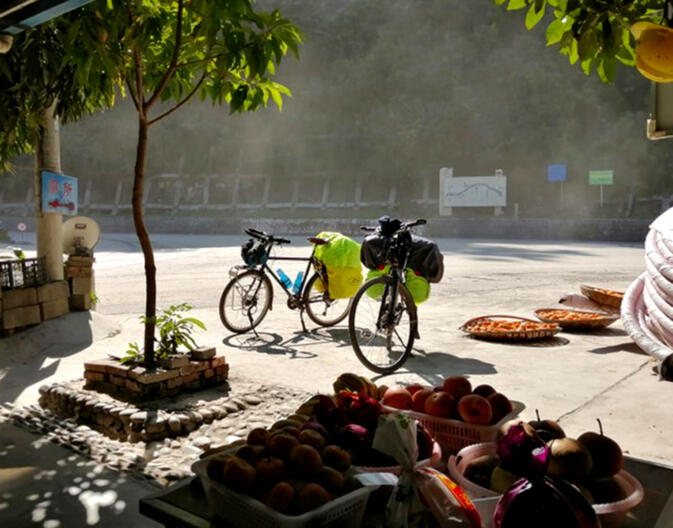 At the next bridge, the road becomes the G320. This means that all traffic that wants to avoid the motorway is now joining us. It becomes markedly busier, with big and overloaded trucks. We are glad to roll into Wayao, our destination for the day, completing our first stage of the bicycle tour.

Tips for cycling in the Pijiang area

One can use both Yunlong Town and Nuodeng Village as a base for day trips in the area.

The Taiji viewpoint is about eight kilometres from Yunlong and 400 metres up.

Further along the same road is the Tianchi Reservoir and National Park. It's a round trip of 46 kilometres and 920 metres up from Yunlong.

Baishi Village is 52 kilometres up the river from Yunlong, ascending 460 metres. From there, one can make a day trip to explore the ancient wooden Caifeng bridge at Shundangcun — a 35-kilometre round trip and 120 metres up — and the rattan Shandang bridge on the same road, some 13 kilometres from Baishi. Coordinates: N 26-15-32 E 99-24-12.

The Jiancao and Qingshuihe tributary valleys are nice to cycle, but the villages don't have accommodation that allows foreigners. There is an impressive and very narrow gorge into the Qingshuihe valley. Coordinates: N 26-03-17 E 99-21-57.

Nuodeng warrants a full day of sightseeing. Hiking trails starting from Nuodeng take you into the mountains behind it.

Yunlong is 460 Km from Kunming and it takes a full day to get there — an early bus from Kunming West Bus Station to Dali Xiaguan and the afternoon bus from there to Yunlong.

Thanks for this article. It would be great if you could put the characters for the places you mention e.g. yunlong

it's okay, found it on another article www.gokunming.com/[...] it's 安排怕人天老爷 the most obvious yun 云 and long 龙