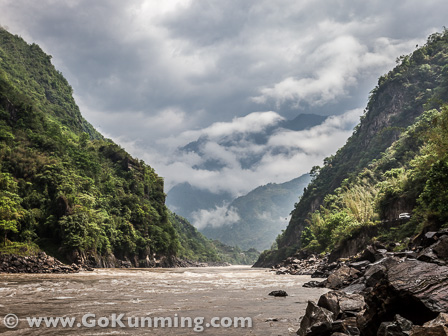 The SCMP report quotes a State Council blueprint released January 23 that reads in part, "Hydropower bases on the Nu River and the upper reaches of the Jinsha and Lancang will be kicked off in an orderly manner."

The document goes on to say implementation of the damming projects will begin no later than 2015. If fully executed, the plan would include the construction of four hydropower projects on the Nu River and 54 other "key stations" in the Three Parallel Rivers Protected Areas. Any construction along the Nu River will have to pass environmental and seismic impact reports.

Located in Lijiang, Diqing and Nujiang prefectures, the Three Parallel Rivers region contains the north-south flowing Jinsha (金沙江), Lancang (澜沧江) and Nu Rivers. The Nu River is the westernmost of the three and flows through what is often referred to as the Grand Canyon of the East. 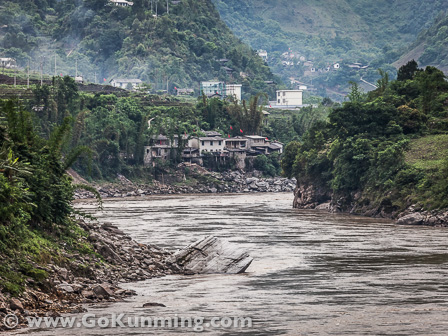 The three parallel rivers pass through steep gorges that reach 3,000 meters in depth and are flanked by glaciated mountains that soar as high as 6,000 meters. The site is made up of eight protected geographic clusters and is considered one of the most biologically diverse temperate areas in the world.

Efforts to dam the Nu River were scrapped at the order of Premier Wen Jiaobao in 2004. Wen, a geologist by training, suspended construction plans and commissioned a series of environmental and geological impact studies regarding the dam. This was seen as an early victory for Chinese environmentalists. However, those same activists are claiming the revived Nu River dam projects were approved without public discussion or transparency, according to the SCMP report.

Since the 2004 moratorium, the project has resurfaced repeatedly in the news — most notably in 2008 when then Yunnan party chief Bai Enpei remarked that building a dam on the Nu River were an inevitability. In 2011 energy giant China Huadian Group unveiled plans for a dam on the Nu River but until last week no official word had been issued by the government.

The United Nations (UN) has in the past threatened to delist the Three Parallel Rivers from its list of World Heritage Sites due to concerns about over-development and environmental degradation. As of this writing, the UN has released no statement regarding these new developments.

It's not so bad, depends on HOW they implement the hydropower stations. For high potential (e.g. very steep drop inclines), power may be extracted by sluicing the stream - that is, diverting a portion of the river into the water turbines, then having the water rejoin the flow somewhat downstream.

The topic states Nu River Dam - which implies the not so pretty alternative - installing a series of actual dams as opposed to sluicing - this extracts more energy, as one uses the full potential of the water - but is what ecologists and environmentalists complain heavily about - significant changes to the local fauna and ecology that evolved over billions of years.

Hopefully the government did a serious environmental impact and will do minimal damage to the environment. On a side note - these construction projects will last over a decade, create hundreds of jobs (perhaps thousands), and spawn rural economies to support the laborers in these remote places, not to mention the significant gains from the badly needed renewable, clean power.

If the environmentalists and ecologists are truly serious about environmental protection, they'll put their money where their mouth is and support other clean energy projects - such as solar, etc that can actually compete (after construction subsidies) with these hydropower projects - which is near impossible economically.

Yeah, this is one of the most disappointing articles I've read on GoKunming. It is a real shame...

One has to argue the demand for such dams. In the article about all of Yunnan being "plugged in", apparently we're exporting 200 million megawatts to Guangdong alone?

Got to check out those places before they change forever..

I wish they had basic energy conservation in all these new buildings..2 cm of insulation would make a remarkable savings in energy. Heating or cooling combined with high humidity levels is a real energy eater.

In the past most endured the damp cold or the humid heat but the new generation would rather spend the cash on comfort while the concrete buildings absorbs the energy by exchanging humidity in the air....humidity from the bathrooms which seep into the concrete..
It's not rocket science..

They already have sluicing there. Make no mistake, these plans are for proper dams.

I'm having a really tough time understanding why they don't just build a few nuclear plants instead of all these dams. Okay, sure, we know by now that chinese bureaucrats on all levels simply adore large scale brutalist architecture projects, but this is taking it a bit too far...