Following an epic, month-long journey through the province's west, Yunnan: The China You Never Knew rolls into its final stop. All of the places we visited with show host Jordan Porter offer something special — this is true whether it's learning about indigenous cultures, exploring captivating natural spaces or stumbling into regions where a cursory look is never quite enough.

Lugu Lake, where the show ends, encapsulates all of these ideas. The Mosuo people — and their oft-misrepresented culture — live along the shores of a gorgeous lake straddling the border between Sichuan and Yunnan. The point of our travel series was to reveal the people, places, history and customs of Yunnan most of the world will never have had exposure to. Lugu, perhaps better than anywhere else on the list, exemplifies many of the unknown or misunderstood facets of China's most diverse province.

...And that's a wrap for Yunnan: The China You Never Knew

As mentioned, the Lugu Lake episode is the twelfth and final in our series on traveling through the amazing and gloriously diverse locales of western Yunnan. The show was a pleasure to film, and we hope those who have seen one or all of the episodes learned and had as much fun as we did shooting and editing it. A million thanks to everyone involved, especially our interview subjects, guides and the charming random people who took time out of their days to show us around their hometowns.

We hit a lot of places along the trail of Yunnan: The China You Never Knew, from the provincial capital, Kunming, to the charming old towns of Weishan, Donglianhua, Dali and Heshun. From those beginnings, it was on to the volcanic splendor of Tengchong, the Tea Horse Road outpost of Shaxi and the rock climbing crags around Laojun Mountain. Next up, it was onward and upward to Yunnan's own Shangri-la, a hike through the stunning immensity of Tiger Leaping Gorge and a stopover in romantic Lijiang. It's was an epic trip, and we hope you enjoy every episode!

The Mosuo people are classified by the Chinese government as a branch of the Naxi minority nationality, despite the fact the dialects of these two peoples are mutually unintelligible. The Naxi are patrilineal and follow Mahayana Buddhism laced with Tibetan and Daoist ideas, while the Mosuo have been Tibetan-style Buddhists since their seventeenth century conversion by a Gelukpa monk. Traditionally, every Mosuo family had its own monk, who performed rituals on their behalf in a separate room of the family compound.

Though Tibetan Buddhism is the official religion, the most prominent deity in the Mosuo pantheon is their own goddess, Ganmo. She oversees the livestock, crops and general prosperity of the people, especially the conjugal life and childbearing of the women. Mosuo painters depict her as riding above the clouds astride a white stallion, her left hand gripping the reins, her right hand grasping a golden flute. 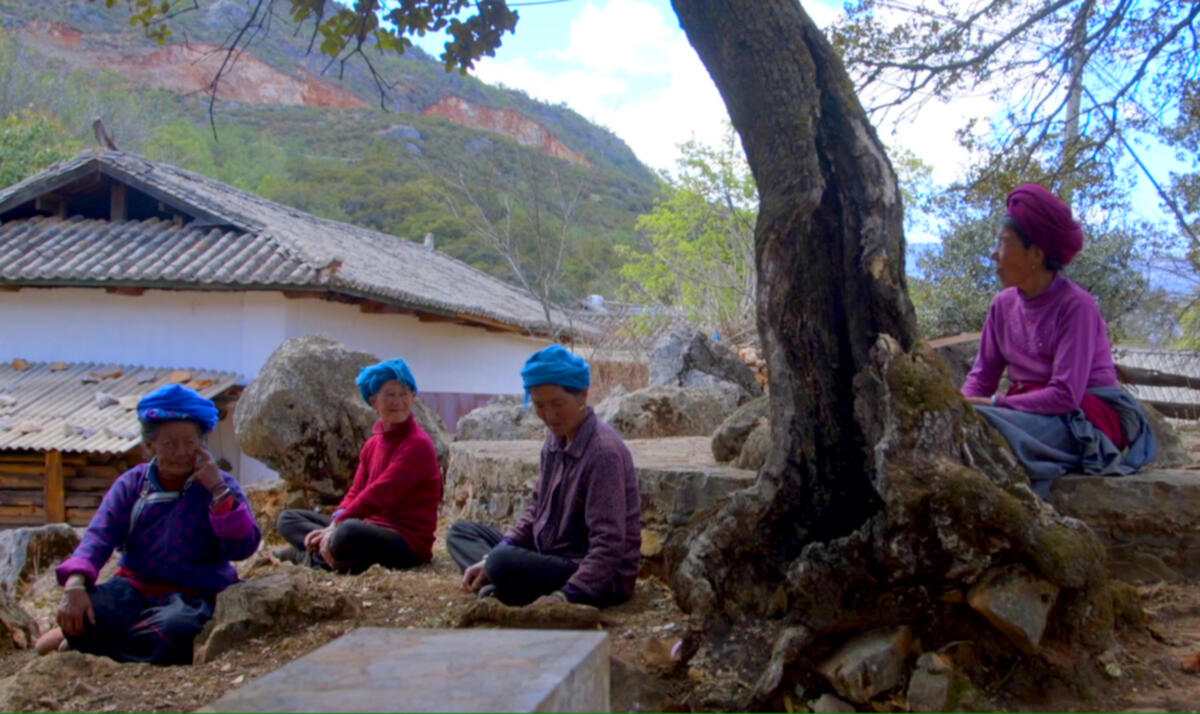 As the Divine Protector of the Mosuo people, goddess Ganmo's status survived the transition in Mosuo religion from shamanistic animism to Yellow Hat Buddhism. Important Buddhist ceremonies begin with prayers to Ganmo. White, breast-shaped mounds — called tsotah in the Mosuo language — dot the landscape around the lake, along the shore and high up on hills, and are shrines where people pay homage to the goddess.

Each tsotah contains a niche where devotees place burning pine branches. The white smoke curling up into the sky is a pleasing sight to Ganmo. Worshippers also burn incense sticks and toss an offering of barley flour and rice grains on the flames, and then kowtow in front of the mound.

Occasionally the Mosuo honor Ganmo by organizing what is called a Parade Around the Sea — an all-day hike around the lake. The procession halts at every tsotah, participants burn incense and offer grains, kowtow and press onto the next destination, chatting and joking as they walk. Lamas in the entourage chant scriptural passages along the route. The Parade Around the Sea is not a fixed festival with an annual observance. Those who feel the urge can undertake one on the fifth, fifteenth or twenty-fifth days of any lunar month.

YouTube! How screwed up is that? A cultural video about China blocked in China.

You don't need youtube. You need to stay trapped in the dark ages.

dolphin, perhaps Jordan Porter's target audiences are foreigners looking in.... to plant seeds of interest in those who have yet to visit China, let alone Yunnan.

As for us expats living inside the murky fish bowl, the silver lining is big brother's gradual easing of VPN restrictions in a bid to lift barriers to attract more foreign investments.

By end of this year, foreign firms will be permitted to invest in VPN services in designated trial zones in Beijing:

Though Jordan's "Destination China" channel will continue to be blocked, VPN usage to bypass the GFW may one day be officially legalized in cities like Kunming. Expats won't need to look over one's shoulders with so much dread.

What gradual easing? This relates to VPNs for business use not personal use. Businesses in China can't function without VPNs. This ruling will allow foreign firms to invest in VPN services for business use. It won't free up the internet for the man or woman in the street whether Chinese nor foreign.

Allow me to elaborate.

which "may" possibly trickle down to expats "one day," as mentioned.

I did not mention anything about Chinese civilians. Nor did I imply this gradual easing would suddenly free up the internet for all, as you offhandedly concluded.

First of all from a legal perspective, this going against the grain first step creates policy transparency for foreigners conducting business in the Mainland,

For instance, Apple Inc. satellite R&D offices in several Chinese cities are prone to ramifications for something trivial like accessing their Facebook page via VPN if central government decided to retaliate against the U.S.-led Huawei ban. Currently AAPL is at the mercy & whim of tit for tat retribution.

With this official VPN permittance from Beijing, coming into effect in a few months, such murky political maneuvers are relegated back to aforementioned "dark ages,"

Of course this transparency chess move is meant to dissuade HQ of foreign firms from exodus to competitors in SE Asia, Yet from hindsight, laying out building blocks of transparent regulatory norms in trial cities such as the 1st tier Beijing or Shanghai, eventually spread across the map to other provincial capitals of secondary tiered cities. Particularly Kunming, which Beijing has designated as BRI investment gateway to SE Asia and beyond. It is a step in the right direction. Silver lining so to speak.

Why don't you get a job where your talents would be appreciated? In corporate communications or some related field. Maybe you already have.

It wasn't a compliment of any kind.

If any Rinpoche members exist in the Mosuo community, they should periodically remind the townsfolk.that rituals of burning incense are opportunities to ground oneself in the here and now, rather than diverting that focus to worshiping or pleasing a deity.

Sacredness reside in oneself, of those beside you, and of the surrounding nature.