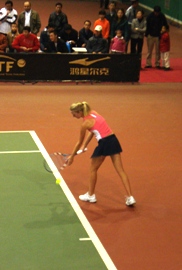 Over the weekend Haigeng National Training Center in Kunming hosted an International Tennis Federation Women's Circuit tournament, with 32 players from 15 different countries playing for US$50,000 in prize money. It was the first time that the circuit has included a Spring City stop.

Yanina Wickmayer defeated her doubles teammate Ursula Radwanska in straight sets (7-5, 6-4), to win the Kunming tournament. The 18-year-old Belgian seemed to have a mental edge over her opponent, with seven out of eight deuces going her way. Wickmayer and Radwanska took the doubles crown together on Saturday.

Wickmayer has been on a bit of a roll over the past five weeks. During the circuit's five-tournament Asia swing, she reached the finals four times and took the title three times. She improved her world ranking from 350 to 150 and played her way into January's Australian Open.

Kunming received mixed reviews from the two finalists. Competing and lodging near Haigeng, they were close to Dianchi Lake and had a great view of the Western Hills, but didn't get to enjoy the city. "The facilities are nice, but it's out here in the middle of nowhere," Wickmayer said. "But that could be good if you're trying to really focus on your training for a little while."

Both players agreed that they could feel some effects from Kunming's 1,900-meter altitude. In addition to a little difficulty breathing, Radwanska added that the balls are flatter in a low-pressure environment. "It takes a few days to get used to the difference," she said.

While out watching the tournament this weekend, GoKunming noticed that Haigeng, which serves as a training ground for Chinese and foreign athletes, is keeping pretty busy. On Saturday, we saw a few basketball teams strolling the grounds and on Sunday we ran into the Malaysian national men's soccer team. Zhang Tian You, a manager at Haigeng, said that he also expects to host teams in various sports from Japan, Korea and Singapore in the near future.