By Maggie Rauch in Features on November 6, 2007 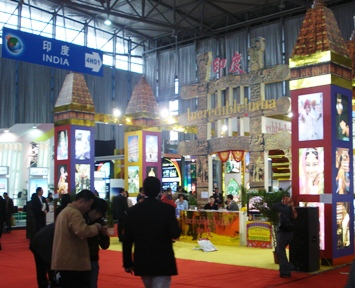 Travel marketers from all over the world descended on Kunming last week for the annual China International Travel Mart, looking to make connections with travel agents and better understand what is generally considered the world's fastest-growing outgoing travel market.

Travel industry suppliers from all over the globe sent representatives to CITM, China's biggest travel expo, which alternates between host cities Shanghai and Kunming. In the evenings, foreign and domestic exhibitors held press conferences and feted the tour operators, travel agents and travel media who attended.

GoKunming didn't find the same complaints that some exhibitors had in 2005 about the city's ability to host the event, but there seemed to be consensus that the show is smaller when it comes to Kunming than when it goes to Shanghai.

"The show is bigger in Shanghai - the crowd is bigger and there are more exhibitors. But maybe you get more visibility here when the show is smaller," said Michael Rudolph, who was representing Air Berlin, a new airline that will have direct flights to Dusseldorf from Beijing and Shanghai. Rudolph also was surprised by the scale of Kunming as a city: "You expect a provincial town but it isn't."

Though the Kunming show may be smaller, it's still important to people like Caroline Zhang, marketing director for the Donghu Hotel in Shanghai. "Every year, the travel agents change. We have to meet the new ones," said Zhang, who brought representatives from her marketing, sales and public relations department. "We have to tell everybody we're still here."

For foreign tourist boards, the vast majority of which do not have satellite offices in China as they do in other major markets, CITM is a chance to learn more about Chinese travelers and make decisions about how to spend their marketing dollars.

The California Travel and Tourism Commission dispatched its international marketing director for the Asia-Pacific region, Matthew Boone, to look into how it could better market California as a destination in China. Boone says the state recently approved US$250,000 in marketing spend in China between now and next June. He says that most of that money will be spent on China's east coast, the origin of 70 percent of travel from China to California.

"That's a lot less than the US$6 million we're spending in Japan, but I expect the amount to increase," Boone said.

One of the biggest and most impressive booths at the event was that of India, a country that became more accessible from China with the launch last week of two new China Eastern routes, Kunming-Calcutta and Guangzhou-New Delhi. Though the routes will largely carry business travelers, they also increase opportunities for tour operators like Amit Prasad, vice president of India Journeys.

"We're getting more tourism interest from China and India is increasing its China marketing efforts," Prasad said. "And our Ministry of Tourism is opening a marketing office in Beijing." He also expects growth in China-bound travel from India. "Kunming has a lot of potential for Indian tourists," he says.

The expo lasted from last Thursday through Sunday, but was only open to the public on the weekend. Most of the international exhibitors' marketing directors and vice presidents of Asia marketing packed up Friday afternoon, leaving Chinese partners or hired help to staff the booths on the weekend.

Though most foreign exhibitors didn't seem to have plans to stick around Yunnan after the event, at least one Chinese exhibitor was planning to take advantage of the opportunity. "I like it when the expo is here because I can do a little traveling in Yunnan," said Leng Jie, business department manager for the Shanghai Zhu Jia Jiao Ancient Town Tourism Development Co. "I'm going to Zhongdian the day after tomorrow."