It seemed that years had passed since my last backcountry adventure in Yunnan — and obligatory post on GoKunming — and the file on my computer that I use to keep track of potential hikes was growing embarrassingly long. The main issue seemed to be a lack of practical options. It had become rare to have more than a few days off from work and family obligations, and I have long since picked off most of the 'low-hanging fruit' in Dali (大理) and Lijiang (丽江).

I decided that it was time to begin exploring the backcountry in Diqing Prefecture's Shangri-la (香格里拉) region in earnest. I picked out Qianhushan (千湖山), due mainly to its enticing name — which translates literally to 'Thousand Lake Mountain' — as well as its relative proximity to Dali Old Town (大理古城). With the help of two websites and an app, I put together what I thought would be an interesting route, and downloaded the file to my phone.

I decided I would do the hike alone — sans partner and sans guide. Technically, the village that claims tourism rights to the Qianhushan area requires a local guide for any trip into the mountains, but I don't enjoy the sacrifice of freedom. I like to manage my own time and find my own way — even if it's the wrong way.

I set off from Dali by car in the late morning, and arrived at the turnoff to the trailhead near the little village of Shajisha (上吉沙) in the early afternoon. From Dali, it was about 180 kilometers north, as the crow flies on highway G214. It had been raining off and on throughout the drive and started up again as soon as I began to hike. I took out my trusty umbrella and set off along a dirt road. I knew from my reconnaissance on Google Earth that I could stay on this road for at least five kilometers, but that it wound back and forth across the mountain and would be much less interesting than finding a foot trail through the forest. I turned onto a path that seemed to point in the right direction, but it ended abruptly after about a kilometer.

Too stubborn to admit defeat and turn back, I decided to scramble up a steep hillside to try to rejoin the road. The slope had been reduced to a slippery mess from the rain, and I promptly fell and bent the umbrella. I tried fixing it with my front teeth, which resulted in a chipped tooth and an umbrella that was still broken. Oh boy, was it going to be a long day...

I finally found my way back to the original dirt road, but shortly thereafter left it behind for good. I was shocked to discover that the forest here was in a very sorry state. All of the old-growth below 3,600 meters in elevation had been cut, and the villagers were moving higher and higher into the mountains in search of the massive trees needed to build traditional wooden houses. One pile of logs would be used for the construction of a solitary house. One house! I suddenly recalled a Tibetan acquaintance telling me of a traditional saying, which translates loosely as 'one house, one forest.' 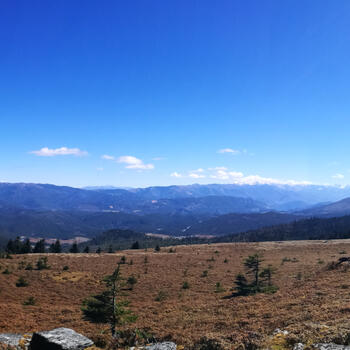 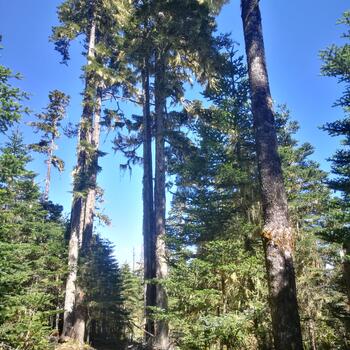 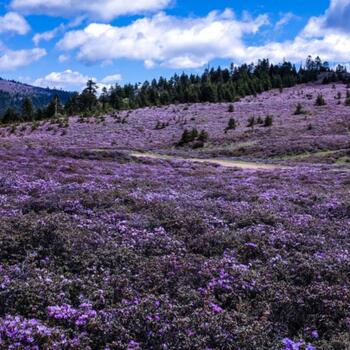 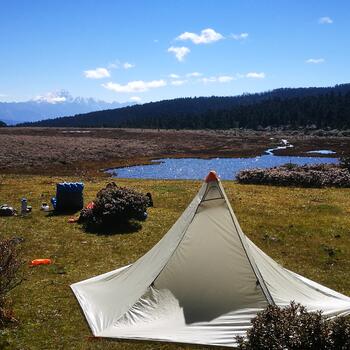 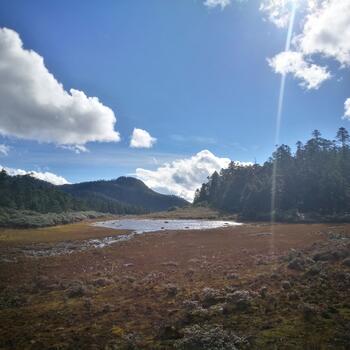 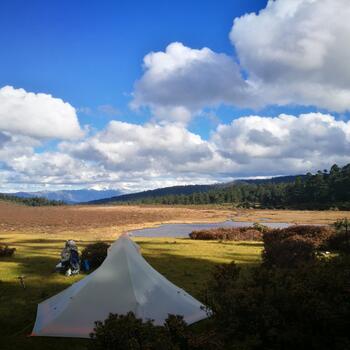 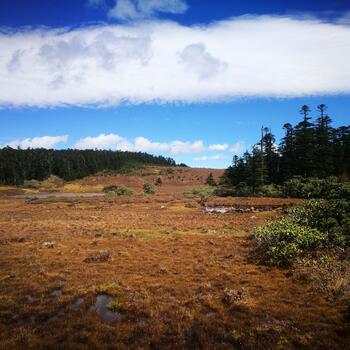 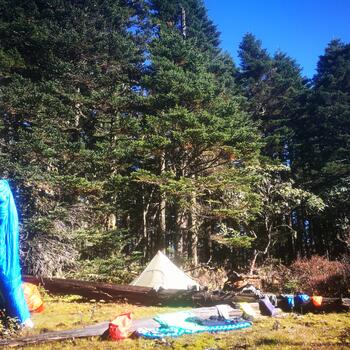 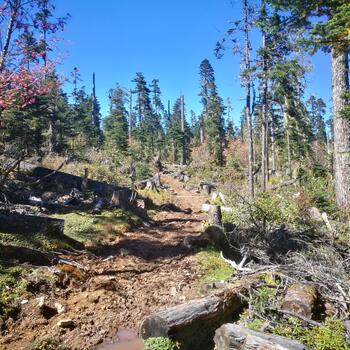 It wasn't until I climbed above 3,800 meters or so that I stopped hearing the buzz of chainsaws. I reached a large meadow in the late afternoon, and as the rain had steadily intensified, I flirted with stopping here for the day. Then again, I figured I still had a couple of hours of daylight and my goal of reaching Spoon Lake (勺措) seemed well within reach.

Unfortunately, many days — or perhaps months, when the summer rain season is taken into account — of precipitation had turned the meadow into a massive swamp, and progress across it was slow and painful. In order to avoid stepping into deep water I had to hop across using tufts of grass and small stones. It probably took two hours to cover 1,000 meters of flat ground.

Meanwhile, it was now pouring and I was starting to lose my bearings and my motivation. I stopped where I was, and spent ten minutes pacing back and forth searching for a clearing that wasn't completely saturated where I could pitch my tent.

I had purchased a new ultralight tent recently, one held up by a single trekking pole and weighing in at less than one kilogram. It didn't even come with groundsheet. This meant that I would be sleeping in a puddle. Literally. I made camp as quickly as possible, heated up some food and ensconced myself in my sleeping bag. The storm didn't abate until just before dawn, and I don't think I managed more than an hour or so of sleep. It was cold, wet and miserable.

Late the next morning, I unzipped my tent and was greeted by a cloudless azure sky. It seemed like a worthwhile reward for my suffering and filled me with hope and excitement for the day ahead. Unfortunately, all of my stuff was soaked, and I wouldn't be going anywhere until it had dried out.

By the time I had hung and repacked everything it was past noon. I backtracked to the main meadow and continued on the loop that I had mapped out for myself. Out of nowhere, I noticed a large black object bounding towards me. A bear! Nope, it was just a lone yak, which had been separated from the rest of the herd and now might need to spend the winter alone in the meadow. It followed me across the clearing, perhaps hoping that I would lead it to a more hospitable place. As the trail began to steepen, I turned around and it was gone. I wondered if the beast would survive the winter.

I soon reached a pass, with beautiful views of Mount Abuji (阿布吉山) to the northeast and the Gaoligong mountain range (高黎贡山) visible to the west. Unfortunately, the trail that I had assumed would take me across a ridge line didn't exist. I took off my pack and scouted for a kilometer along a trail that went down and around the other side of the mountain. I was concerned exactly where it would take me, as the eastern side is where most of the lakes were. More importantly, it was where I had parked my car.

I returned to the pass, savored the views for awhile, and headed back down in the direction from which I came. I arrived back in the main meadow in the late afternoon and pitched my tent in a section that was sheltered from the wind with fantastic views of Haba Snow Mountain (哈巴雪山) and the Jade Dragon Snow Mountain (玉龙雪山).

After another night of fitful sleep, I woke for good around dawn, and watched as the sun bathed Haba and the rest of the mountains in sunlight. It would be at least an hour before the layer of ice that had formed on everything thawed and another couple of hours before it was warm enough to consider doing anything.

The hike back was much more enjoyable than the hike up. The views were now amazing, as all of the surrounding mountains were covered in a layer of picturesque whiteness. I stopped at the edge of the meadow to snap a few photos and began the hike down. Suddenly I noticed something that looked like a common house-cat, but at close to 4,000 meters above sea level, it didn't seem possible! Then came another and another and another. Monkeys! There were about a dozen of them, and the sounds they made seemed to indicate a clear dissatisfaction with my presence. I picked up a couple of rocks, just in case, and continued walking.

I reached the trailhead in the early afternoon and officially bid goodbye to Qianhushan. It had been an intense experience — the complete lack of human interaction and cell phone service had been predictably discomfiting — and there were many moments where I wondered if perhaps my decision to hike alone wasn't incredibly foolhardy.

A villager I spoke to later insisted that there were still bears and wolves that roamed these mountains. Incidentally, he pointed out that the monkeys I saw were most likely common macaques, rather than the elusive Yunnan Golden Monkeys. In some sense, the hike had been an utter failure, in that I wasn't able to reach any of the large lakes or complete the loop that I had planned for myself. And yet, I returned from the hike invigorated and motivated to make more time for such expeditions. So let's call it a success, one that I hope to build on at a later date.

Nice read - wandering around unplugged alone and not overly organized, random errors can lead to discoveries. In an age of laid-out possibilities for success it's nice to come upon the unexpected, There are no utter failures.

These are the type of unique contributions that set GoK apart from similar websites in Beijing and Shanghai.

Sounds great apart from the weather obviously. Something I wish I could fit into my current life, last time was in the mountains of Kashmir, India before coming to China 6 years ago.

Amazing perseverance (and stamina). Definitely appears to be a worthwhile hike in the right season with better directions. I've been on hikes that require more time spent on surviving than enjoying and definitely prefer the opposite. Inspirational photos! Was wondering where the trees come from that are fueling the massive development of Shangrila. Damn! Tibetan house design is beautiful but devastating.

Bears and wolves? Now that is something that needs to be researched. Love to see some photos of wild animals (other than monkeys) in Yunnan.