By Matthew Sills in Features on November 5, 2007

It's no secret that Kunming has long been a step behind the coastal cities when it comes to business investment and development. This trend has started to shift as big business starts to take increasing interest in second-tier cities. This shift has led to an increasing number of Chinese and laowai moving to or returning to the Spring City.

Having recently decided to return to "the real China", I was faced with the task of moving several years worth of accumulated stuff from Shanghai to Kunming. A trip over to the rail station in Shanghai found me some answers. China Railway Express Limited is the state-owned company that runs the rail freight network. On top of this, there are a number of smaller service providers who run the mini-vans to collect your stuff, and provide the labour to pack it up. Guys from these companies hang out at the China Railway Express office, touting for business. One of these guys, Mr Liu, talked me through the procedure, and gave me his number. 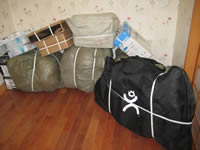 The day before I was due to send my stuff, I contacted Mr Liu to arrange a time. At the agreed time, Liu and his colleague arrived and packed my stuff into boxes with impressive speed. After the mini-van ride to the consignment depot, my stuff was strapped up and wrapped more throughly, and weighed. It all went very smoothly.

For the express Shanghai-Kunming service, which takes three days, the fee is 5.5 kuai per kilogram. There's no 'size' component to the pricing. Fluids (and presumably dangerous goods) are not allowed. My bike (in a bike-bag) was accepted without problem.

At the Kunming end, the mini-van driver called the number I'd left, and delivered the stuff direct to my Kunming address.

I send stuff from Kunming to Shanghai via YTO Express (Yuan Tong) for RMB5.50, airfreight price. Just thought it's good to share this info.