Snapshot: A trip to the world's tallest bridge

By Patrick Scally in Travel on November 7, 2017 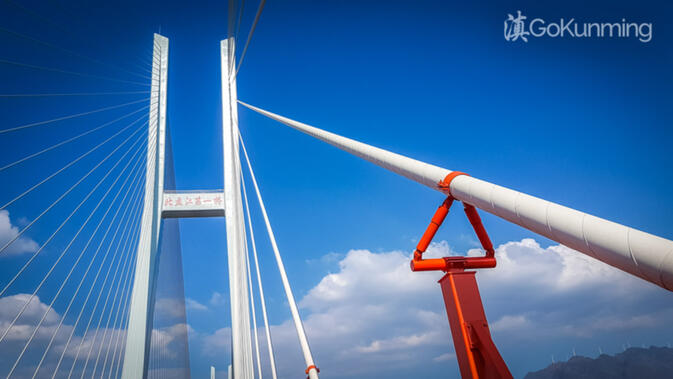 As with skyscrapers and other monolithic feats of engineering, there is always some debate when it comes to rating the biggest and tallest bridge. By some metrics, the Duge Beipan Extremely Large Bridge (都格北盘江特大桥) is the tallest span — road to ground — on earth. The Chinese certainly see it that way, and designers chose its location specifically for the honorific "world's highest". 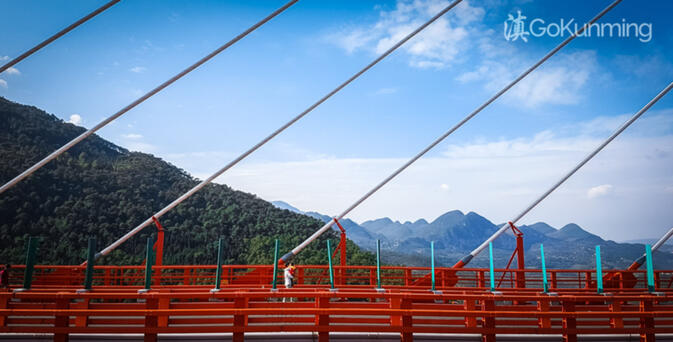 The bridge straddles the provincial border between Yunnan and Guizhou. And, in fact, it is not one single structure, but a series of bridges and huge tunnels carved through the Karst mountains. 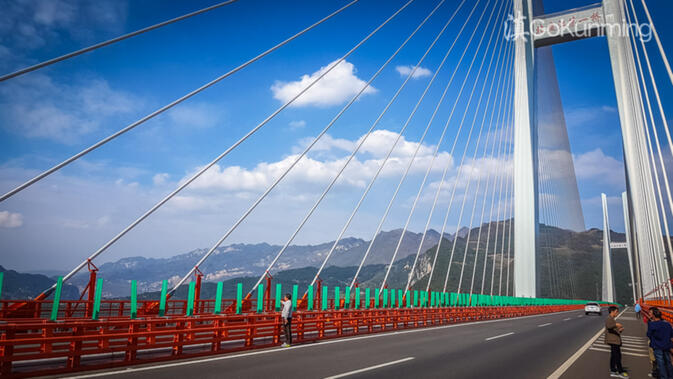 Built at the cost of just over one billion yuan (US$155 million), the cable-stayed bridge stretches for 1.34 kilometers. Initial work began in 2013, and was completed at the end of 2016. The Beipan Bridge opened to traffic on December 29, 2016. 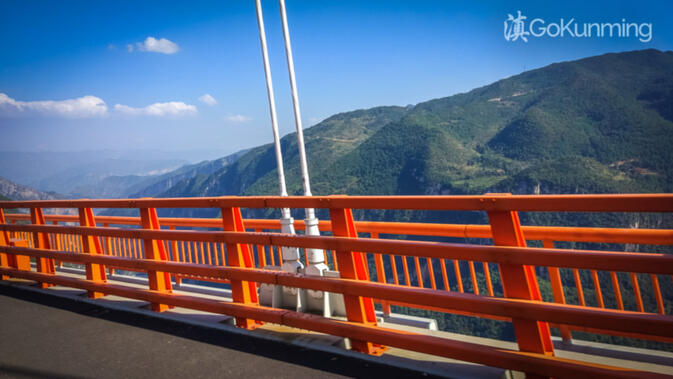 We approached this behemoth from the west, heading toward Guizhou from Xuanwei County (宣威县). The landscape there is quite lovely, with rolling forested mountains that are often draped in fog. 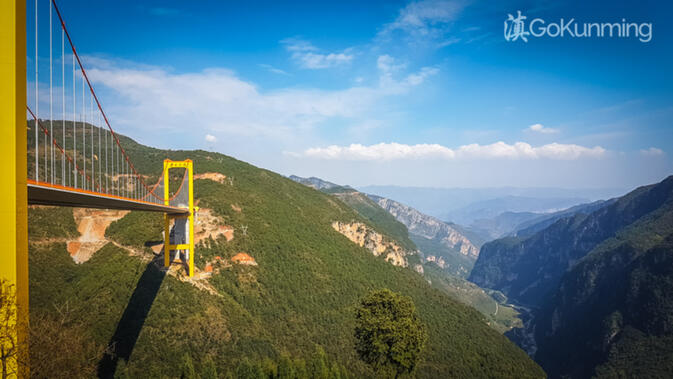 When we visited, it was a crisp and cool autumn day and the air was fairly clear. While driving along the smooth tarmac of the Guizhou-Ruili Expressway (贵瑞高速公路), the first indication one sees of the bridge is a soaring yellow ribbon in the sky.

Upon closer inspection, the Puli Bridge (普立大桥) section is impressive. Twin buttresses swathed in bright mustard-colored paint loom over the roadway. They are visible for kilometers in every direction. 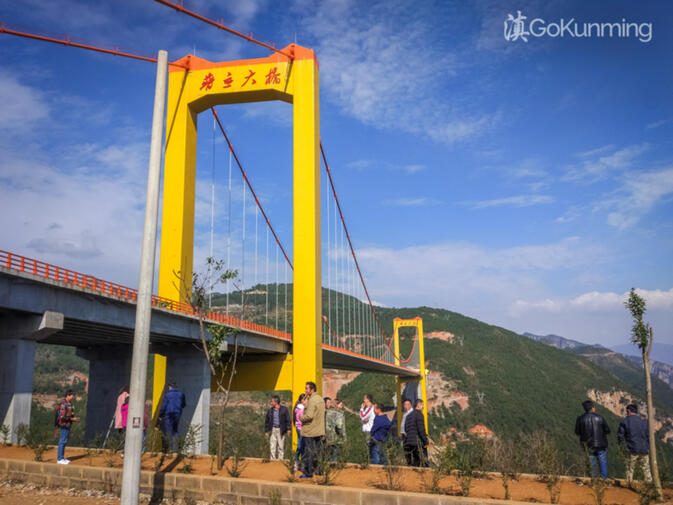 An absolutely enormous observation area sits to the right of the roadway. Currently, it is simply a wide and flat unpaved swathe of land. Just beside the lookout spot, colossal concrete bridge abutments anchor immense support cables, some of them weighing in at 20 tons. 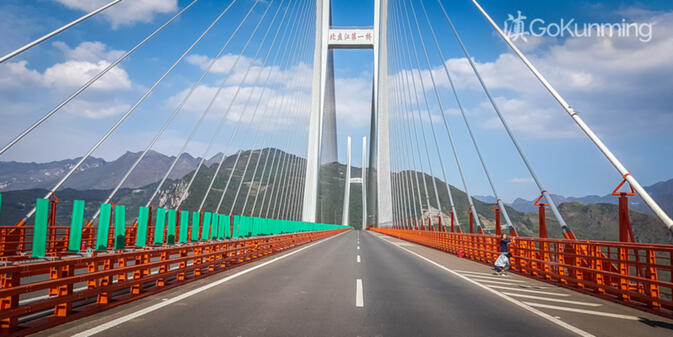 But the overlook area and looming yellow joists were not the prime attraction. To reach that, we would have to drive through three tunnels — one quite long, two much shorter. 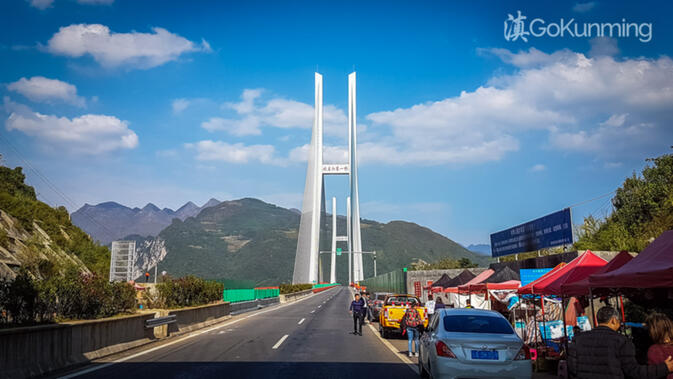 We hopped back on the entirely empty highway and headed down the road for a little more than a kilometer. We emerged from the final tunnel into a small canyon. In front of us, nearly spilling over into traffic, were a series of tents where people were selling locally grown garlic, ginger and fried potatoes. 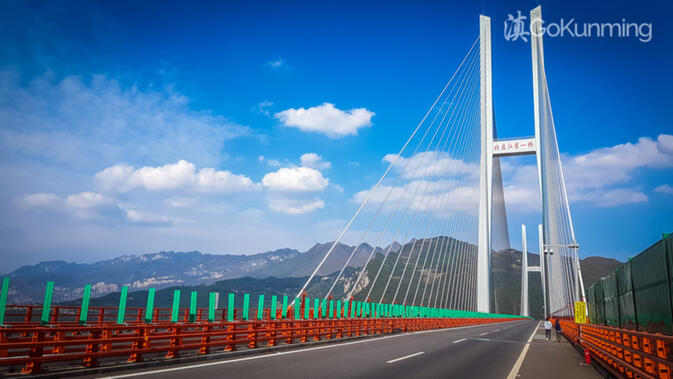 Beyond that stood the bridge, the actual Beipan section. We walked out to the middle of the span under a tuning fork-shaped support structure that rises 269 meters above the road. We were unbothered by the fact that sightseers walking along the bridge are separated from passing vehicles by literally nothing.

Just over 565 meters below us ran the Beipan River. It is bisected by an immense crag that looks as if some giant stomped on a mountain. The wind was calm and there were very few other noises. Most of the gathered tourists — ourselves included — gawked in silence. If you are interested in visiting Xuanwei, the world's tallest bridge, or anywhere else in Yunnan, Kunming-based tour operator Wonders Of Yunnan Travel provides rental cars with drivers, hotel bookings, all sorts of travel-related services and other valuable tourism information. Please get in touch directly for further details.

Some of those mountainside villages you see from bridge must have been quite isolated before construction got underway.