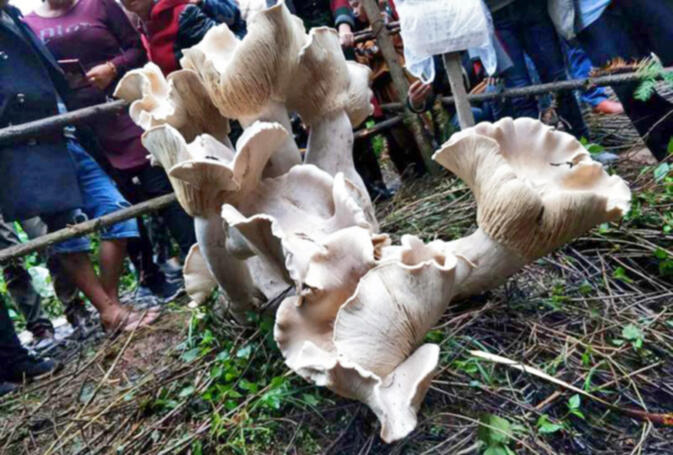 As China settles into the final days of the Nineteenth Party Congress in Beijing and Xi Jinping ascends to the lofty company of predecessors Mao and Deng, Yunnan, bless its heart, remains Yunnan. The biggest news story to break South of the Clouds this week does not involve consolidations of power or derivative five-year economic plans. Instead, the discovery of an out-sized mushroom in the province's west is making headlines.

The fungus in question was found in the woods six kilometers northeast of Tengchong (腾冲) by a villager living in the town of Xiaoluoyiping (小罗绮坪村). By some accounts the cluster of mushrooms continues to get bigger. A local man named Liu Dingsen (刘定森) found the mushroom just as it had broken through the soil on October 19. He left it to grow and returned three days later to find the fungus had sprouted eight separate stalks, some of them nearly one meter tall. Liu told reporters from Yunnan Harbor that in his 81 years living in the area he had "never seen anything like it".

It is a bit of a scientific marvel, but this being Yunnan, the most pressing question has become, is it edible? The problem is, mycologists remain uncertain as to whether or not the specimen is poisonous. Some media reports, citing experts from the Kunming Institute of Botany, claim the mushroom is perfectly harmless. However, a Tengchong native who sells mushrooms for a living said he tasted a tiny sample that made his tongue go numb — a quality he asserts indicates some level of toxicity. Many of the experts interviewed agree the fungus belongs to the genus tricholoma, although the species remains undetermined. 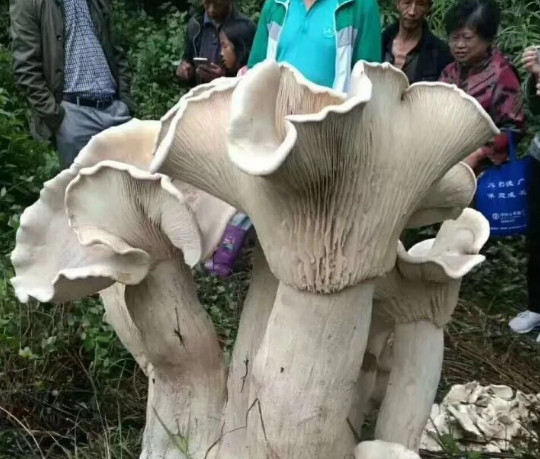 Because locals have so far received no clear answer, they erected a small wooden fence around the now 50-kilogram mushroom. The barrier was built in the hopes of keeping marauding bands of gourmands from digging the thing up and serving hotpot to an entire village. While concerns over potential poisonings are certainly one motivation for protecting what villagers now alternately refer to as the "king of mushrooms" or the "elephant foot", free publicity for the poor rural area is another.

An unnamed member of the Tengchong Propaganda Department explained to reporters that tourism — once nearly non-existent in Xiaoluoyiping — is on the rise. The curious are flocking to the mushroom to take photos. "People from Tengchong and elsewhere are talking about it, and many of them are coming here to join in the fun," said the official. The Propaganda Department is also looking into contacting the Guinness Book of World Records, although hopes are not high that the mushroom will last long enough to be officially measured.

Yunnan is no stranger to crazy mushroom stories, as the province is arguably the greatest place for fungi to grow in the world. Odd tales arise from time to time, as with the hundreds of deaths in villages in the Cangshan Mountains (苍山) blamed for years on a poisonous mushroom species. And while the Propaganda Department in Tengchong may want to set a new world record, they will have a hard time topping the 150-kilogram mushroom dug up in Pu'er (普洱) two years ago.

It is Macrocybe gigantea. And its chinese name is 巨大口蘑.

A friend of ours has a mushroom farm and she recently gave us a bag about the size of a marrow full of soil and mushroom spores. Within a day a golf-ball sized mushroom had sprouted out of one end. Within two days there were three golf-ball sized sprouts. Within three days one had grown to fist-sized. It really was a shock how fast these things can grow. It looks superficially similar to the photo in the article and we ate them without incident.