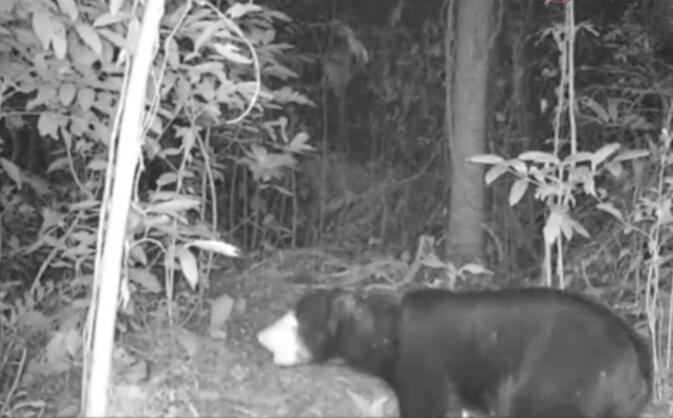 Zoologists working in China's border area with Myanmar announced for the first time in more than four decades that sun bears roam through and possibly live in Yunnan province. A brief infrared video shot in Dehong County (德宏) shows one of the animals stroll past a camera trap for less than ten seconds before wandering out of frame.

Sun bears — known by the scientific name Helarctos malayanus — are known to inhabit parts of Bangladesh, Cambodia, India, Indonesia, Laos, Malaysia, Myanmar, Thailand and Vietnam. Scientists assumed such geographical proximity to Yunnan province would logically mean the bears inhabited at least small sections of southwest China. However, no hard evidence of the animals had been produced since the last documented sighting in 1972.

Dr Jiang Xuelong (蒋学龙) of the Kunming Institute of Zoology, Chinese Academy of Sciences, was lead author of a report on the sun bear video. His team actually obtained the footage in October 2016, but needed to study it to make sure their findings were accurate. In an interview with China Daily, Jiang explained, "This precious video is the first recorded image of the species in China, and strongly supports the existence of sun bears here".

In the wild, sun bears are largely solitary and maintain large individual territories. Feeding mostly on insects, fruit and sometimes flowers, the animals are distinctive for their elongated tongues and powerful jaws. The video capture in Dehong is scientifically significant not only because it confirms bears are active in the region, but also as an indicator of overall habitat health.

The presence of large mammals such as foraging bear species can indicate a forest is in good shape. Dehong prefecture is sparsely populated by Chinese standards and its forests stretch into undisturbed portions of neighboring Myanmar. They thus contain some of the highest concentrations of biodiversity found anywhere in China, although conservation efforts in the region are often lacking in execution or otherwise non-existent.

In Yunnan, the presence of sun bears — which the Chinese government shields with its highest class of protection — may therefore lead to more vigorous conservation efforts in the future. However, before that can happen, more research is needed to find out how many, if any, other sun bears are prowling the rain forests of Yunnan.