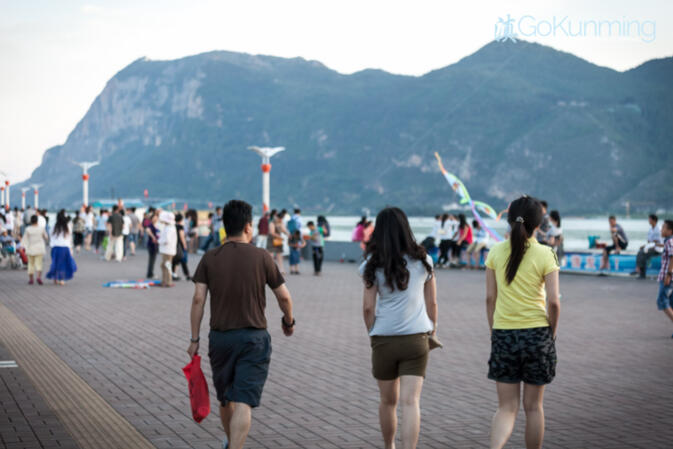 As Kunming continues to grow and change, green space and public gathering spaces remain in short supply. City planners are looking to address such concerns on the shores of Dianchi Lake (滇池) with a multi-purpose renovation project. Construction will begin April 1 along the entire length of Haigeng Dam (海埂大坝), effectively closing the promenade for the next seven months.

The 470 million yuan (US$68 million) undertaking will appear largely cosmetic when finished. However, wholesale changes to the facade will also include improvements to the dam's overall structural stability as well as the installation of a lake water filtration system. The upgrades are part of a large scheme meant to beautify tourist attractions across the Spring City.

Currently, the Haigeng, or Dianchi, promenade is on average eight meters wide, a space that will be doubled to 16 meters once the makeover is complete. In addition to a vastly expanded walkway, the 'City Garden' project calls for extensive park and wetland landscaping, the construction of rest areas, concession stands and modernized lighting, as well as new boat docking facilities.

Pedestrian visitors will no doubt enjoy the enhancements, but the changes they will not be able to see are the most important. The 2,400 meter-long Haigeng Dam was originally built in the 1960s as bulwark between Dianchi Lake and extensive wetlands on its northeastern shore. Once the embankment was finished, the wetlands were drained and filled in with farmland. After 55 years, the dam is in serious need of new support pilings, especially considering it will soon double in size.

As the foundation is rebuilt, engineers will also install a filtration system positioned under the dam designed to remove Dianchi's ever-present but thankfully shrinking sheen of lake-killing algae. The filters are expected to augment other ongoing efforts to clean the lake of its bacterial infestation by seven to ten percent each year.

Improvements to the city's best-known stretch of lakefront property are part of a larger scheme to attract tourists and keep them in the Kunming. The Spring City has long-struggled to retain the tens of millions of tourists arriving by plane, train and bus annually, as people are quick to depart for the province's other vacation hotspots.

It is hoped by government officials that steadily improving convention facilities and hotel options — coupled with continuing infrastructure upgrades — will make Kunming more welcoming to visitors. Haigeng Dam, with its commanding views of the lake and the towering Western Hills, is expected to become a focal point once renovation work is completed at the end of October.

I hope the largest chunk of this money will go to the necessary maintenance of the damn and to the filtration system, etc. - spending a lot of money on making things pretty for tourists is such a roundabout way to produce, supposedly through all them wonnerful trickle-down effects, a more reasonable wealth distribution, that it never really happens. And, as Kunming adds its zillionth car to the roads in order to ameliorate the desperate lives of the middle & upper classes, it is the 25% of the Yunnan population who live below the official poverty level that should be the target of spending efforts.