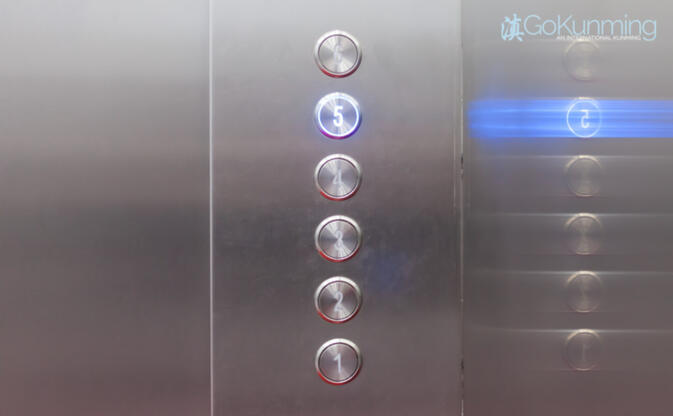 The graying of China's immense population is an issue of serious concern for Beijing, and one that has led to massive legal shifts — for example, relaxation of the one-child policy. On a much smaller scale, but certainly indicative of a general demographic shift, is the embrace of a new policy in several of Kunming's older neighborhoods involving the installation of elevators.

The first xiaoqu (小区) — or residential area — to build an external lift was the Kungang Lingbo (昆钢凌波) neighborhood in Anning. Now several Kunming apartment complexes lacking such amenities, especially those with high concentrations of retired people, are looking to follow suit. Residents are also asking the city government for assistance.

Attaching a new elevator shaft to a building is fairly expensive. This is especially true considering many of the older structures are divided into two apartments per floor with no connecting hallways between other residences. In the case of the Kungang complex, the average cost of installing a single external lift onto a six-story building was 250,000 yuan (US$36,370). Fortunately for residents of that neighborhood, the land owner was willing to pay 40 percent of the bill. 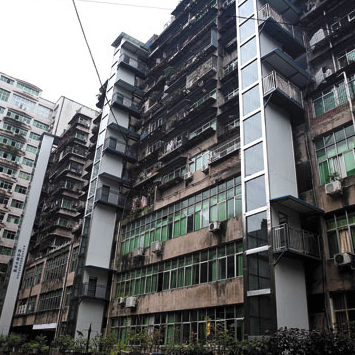 With that sort of financial assistance, each household above the second floor was expected to pay based on a sliding scale. Third-floor tenants were charged 10,000 yuan, those of the fourth floor 15,000, those on the fifth floor 20,000, and so on. Before construction began, people living in the Anning neighborhood met together and voted on whether or not they wanted an elevator and were willing to pay. Once finished, people living on the third through seventh floors were given special key cards giving them access to the lifts.

Residents in other apartment complexes are now figuring out payment schemes of their own in order to build elevators. However, many people are concerned that without subsidies, building brand new shafts will be unaffordable. Many have turned to the municipal government, applying for building grants that are now under consideration.

The petitions often involve testimonials, such as that of a man surnamed Peng. His apartment is on the fifth floor of a building with no lift, and he told reporters he had not been home in more than 100 days. The 86 year-old injured his leg in 2016 and, despite successful medical treatment, can no longer climb the stairs. "An elevator is the common wish of all the elderly people living in these old neighborhoods. There's no way I can get home now," Peng said.

Considerations of how to ensure the well-being and comfort of the elderly is only expected to grow in both Kunming and across China. Today, people aged 60 and above account for less than 15 percent of the Spring City's population, but that number is expected to increase dramatically over the next 20 years. China currently has five working-age people for every one retiree, but by 2040 that ratio will shrink to 1.6:1, according to official estimates. Elevators, it appears, are only the tip of the iceberg.

This is weird. Aren't all the old walk-ups just going to be torn down and replaced with modern high-rises anyway? Also, 250,000 is not "expensive"...it's incredibly cheap. I for one cannot believe they can install an elevator for just 250,000 yuan. Also, the residents pay a one-time fee. But who pays for the elevator's maintenance and upkeep?

@ Geogramatt: I have not heard that all the old walkups are going to be torn down - I certainly hope not. But maybe you have some information that I don't have?