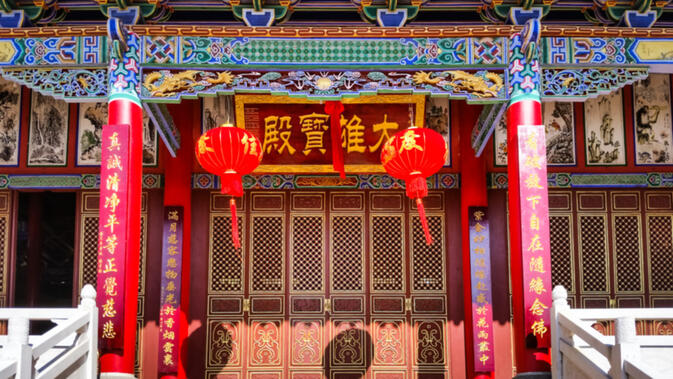 Sometimes it's good to get lost. Several weeks ago, while preparing for the Best of Kunming Awards, a driver and I did just that in the middle of town. It didn't take long to find our way back to civilization, but in the process we came to a fork in the road, one way leading to an obvious dead end parking lot, while the other angled up a hill past lush stands of bamboo.

We picked the latter and nonetheless hit another dead end, for our car at least. But atop the rise where we eventually turned around sat a surprising sight, a lovely stand of eucalyptus forest. At the entrance of what appeared to be a path, there was a large sign pointing the way inside that read 'Lianhua Temple' (莲花寺). There wasn't enough time to explore that day, but I was intrigued enough to return when I had some off time during Spring Festival. 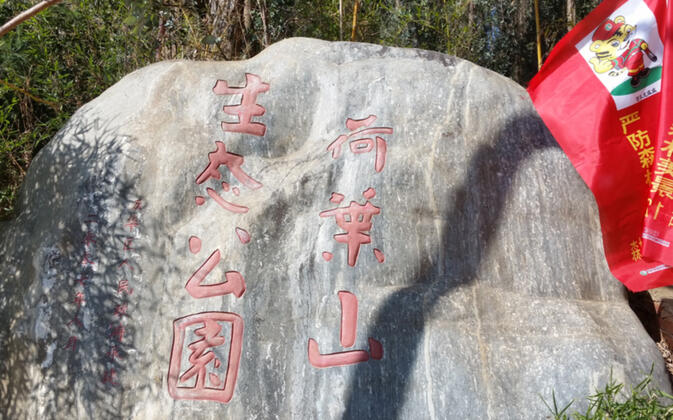 I went back to the hill — called Heye Shan (荷葉山) — on the third day of Chinese Lunar New Year, returning with a slight feeling of apprehension that the forestry police stationed at the entrance to the woods might not let me in because of it being fire season. Approaching four men playing what appeared to be a rabidly intense game of cards, I asked if the path to the temple was open. My question was met with a lengthy series of 'oks' followed by wild gesticulations indicating no smoking was allowed past the card table.

Up I went into Shengtai Park (生态公园). The path started out overlooking a once-promising, but now possibly abandoned condominium development on the left. But the bright orange luxury homes were quickly obscured by trees. As I followed the path, the temperature dropped a bit and what little residual city noise had remained near the gate quickly gave way to the sounds of wind and gently soughing trees. 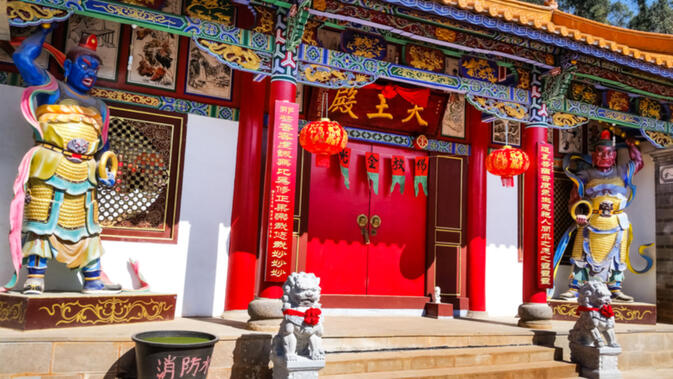 There wasn't far to go — maybe only 200 meters before I reached a quick rise past a well-tended garden plot and a glimpse of the familiar orange-tiled roof of a temple. Lianhua, or 'Lotus Temple' in English, stood before me, set into the hill. The walls were gleaming white in the morning sun, and a fresh coat of lacquer had obviously very recently been applied to the red pillars of the entrance. I expected there would be several visitors inside because of the national holiday, but instead, as I entered through a modest wooden door set just beside the locked gate, I was met with silence.

Eventually a small dog loped up to me, setting off the barking of his much bigger, chained-up companion. After making friends with both dogs, I wandered around the entryway, checking out the oversized door guard statues and the enormous collection of pumpkins sitting incongruously at their feet. 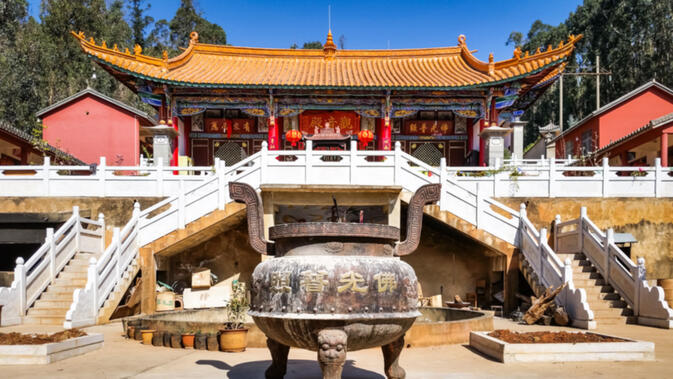 The complex turned out to be a nunnery with one inhabitant — not surprisingly a nun. She was quite friendly and told me to wander and take photos anywhere I chose in her dense and nearly impenetrable Kunming dialect. Flanking the entryway and front square were utilitarian dormitories and a canteen, the latter of which had an absolutely gorgeous hand-carved, five-panel wooden screen set against the wall. It appeared to be very old, which was a bit of a contrast to its surroundings.

Typically, older temples in Kunming feature plaques inset into large decorative stones bearing the history and sometimes founding myth of the building. Lianhua Temple was curiously devoid of any literature of the kind. When I returned to the courtyard to question the nun, she was engaged in animated conversation with a local visitor, and I desisted. 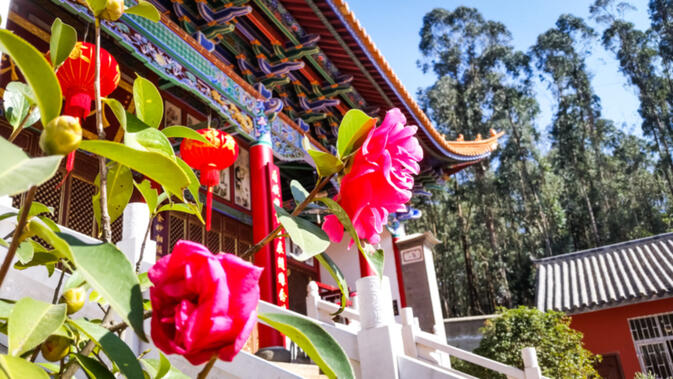 Lianhua has two main shrines, both set above the entrance in typical Chinese fashion. The first and lower of the two contains a modest faux-gold sculpture of Sakyamuni Buddha (佛陀) and his attendant bodhisattvas, Avalokitesvara (观世音) and Mahasthamaprapta (大势至). In addition, copies of the centuries-old arhat statues that make Bamboo Temple such a consistent attraction line the far wall.

Outbuildings on either side of the main pavilion house minor deities, while up above, in the largest pavilion, even bigger gold statues of the three immortals sit flanked by twelve divine women. Sandalwood incense burned everywhere I went, showing that the nun had been quite busy prior to my arrival. 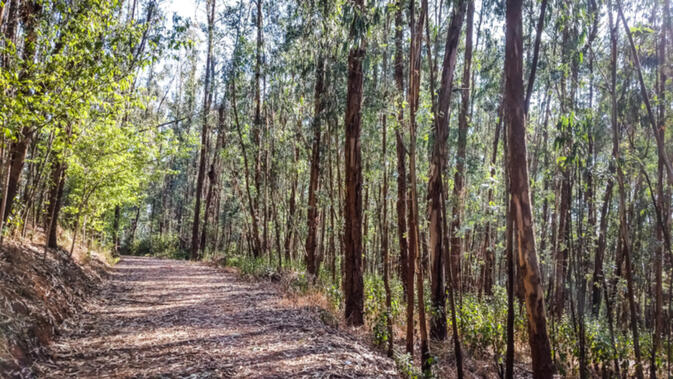 It was a serene and quiet experience wandering around the complex, but there was an underlying feeling of brand-newness that took away a little of the charm. Not every temple can be ancient though, and it was surprising to see such a large place newly built and gleaming in the middle of a forest I had never heard of, especially inside the city.

Any feelings of doubt as to the day's experience were quickly put aside as I exited the shrine and began to explore Heye Shan. Lianhua Temple is completely surrounded by eucalyptus trees, which in turn conceal several paths in different stages of disrepair. 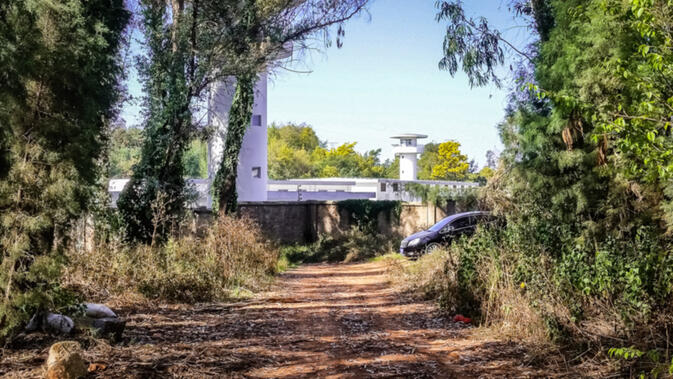 Many of the smaller trails lead to traditional Yunnan mountainside graves, some of which had obviously been visited and spruced up over the holiday. Incense sticks protruded from the tombs, and some were decorated with fresh or plastic flowers. Little cups of what appeared to be flavored rice wine were a common accompaniment as well.

The solitary graveyard was a nice surprise, but one thing did catch me completely off guard — the giant whitewashed walls, mushroom-shaped watchtowers and plentiful razor wire of a prison looming over one end of the trail. Needless to say, I backtracked quickly. 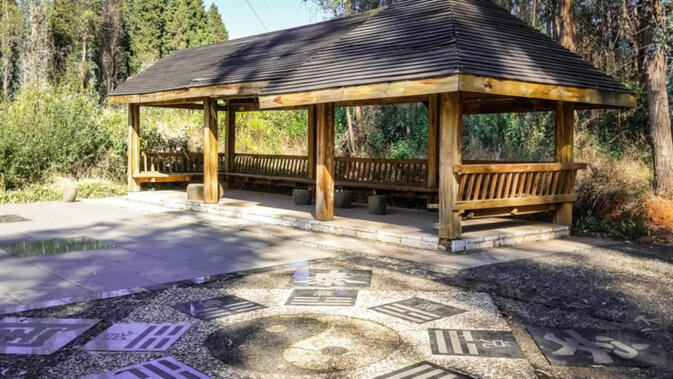 Roughly 250 meters in the exact opposite direction of the prison I ran into an abandoned cistern oddly wreathed by a hedgerow maze, another wall topped with rusty and evil-looking razor wire, and a wooden gazebo with Dai minority influences, all in quick succession. The seating area with the gazebo included a small marble square replete with marble flagstones engraved with the bagua (八卦) from Daoist cosmology. Perfect fit for a graveyard, I thought.

I descended back toward the Forestry Police station via a different path than the one I followed to reach the temple. It was broad, nicely paved with flagstones and had several similar wooden rest areas to the one at the top, presumably for those coming up the hill. My friends at the gate were still engaged in their furious card game, but I asked them if people often picnic inside the park. The answer, as terse as our first interaction, involved annoyed assents and a flurry of staccato 'oks'. It was settled, I'd be coming back. And soon. 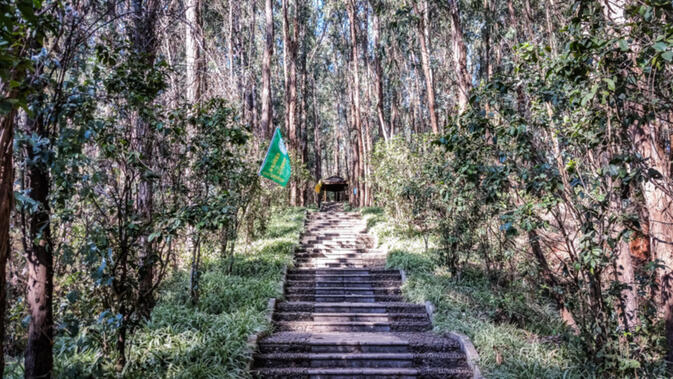 Heye Shan, Shengtai Park and Lianhua Temple are not particularly difficult to find if you know where to look. From Xuefu Lu (学府路), head north on Jiaochang Zhong Lu (教场中路) and follow it as it forks to the left and becomes Jiaochang Xi Lu (教场西路). The road will end at a large parking lot, from which you should head uphill on an unnamed road nicely planted with stands of bamboo. Keep following this street until you reach the Forestry Police checkpoint. The Z2 bus will get you as far as the parking lot just mentioned, and costs one yuan. Just a note — please don't confuse this article's Lianhua Temple to a small Tibetan shrine of nearly the same name located beside the Kunming Zoo. 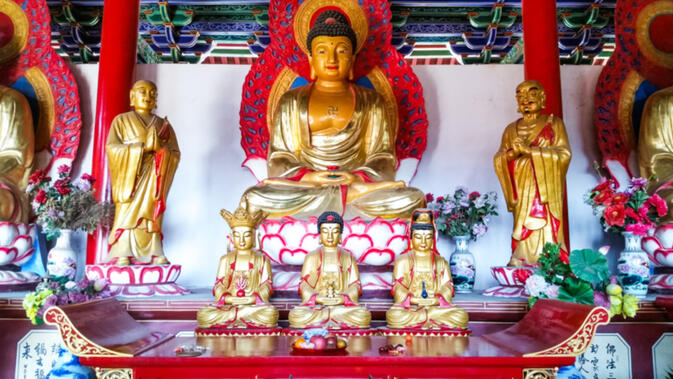 I was dreading an article like this coming out one day. My young son and I head here most weeks for the solitude and fresh air. We've always considered it our secret discovery! (If you do find the gazebo, check behind it for our home-made mouse house!!) I do hope it doesn't get too swamped with picnickers! It is a delightful spot.

I went to the forest today with my young son and two of his classmates. We were let in by the guard after the usual signing in with phone number and we headed up the hill. However, an hour or so later, as we were playing harmlessly amongst the trees, he tracked us down and said we were not allowed to be in the woods, only to visit the temple. He said it was a fire risk. I pointed out that don't smoke, it had rained heavily the day before and the kids were simply hunting for twigs and insects. But he insisted it was his job to remove people and that the forest opened again officially on June 15th (ie rainy season, no fire risk). I told him I was really disappointed but I understood he was just doing as he was told. We left. Maybe he was just having a bad day (we've been 20+ times before and never been kicked out) but be warned.

It might be a new guy, or there is some other visit on this week. It is probably worth trying again, and if the same guy is there, just tell him you are going up to the temple.

I think that's the official rule. No one is allowed in fire risk areas until the fire season is over. Mountain bikers get turned back ag lots of checkpoints throughout kunming during fire season. However, it's only enforced if seen, so just go into woods once out of sight of guards and romp around in a deeper or even more secluded part. Also, as far as I know, no fines if your caught and politely just plead ignorance and make your way out of forested areas.

Forest is shut now until June 2018. Temple may still be accessible if the guards believe that is really your destination.

Thanks for the heads up @Ocean